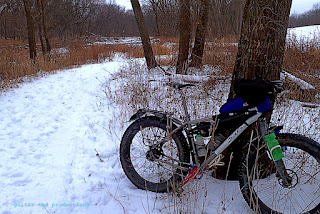 It's the end of the year and time to review what's up with the bikes I used over the course of 2021. You'll get a brief overview, any changes made, and what the future has in store for each bike listed. Enjoy!

Now here is a bike that I do use quite a bit and I probably won't ever be getting rid of it. It is a 2015 model Titanium Mukluk with a Rohloff 14 speed internal geared hub. To my way of thinking, it is about as good a fat bike as I'll ever need, plus it handles okay as a trail bike also.

I use this bike a lot for Winter commutes and as a Winter trail bike, but I do use it in Summer occasionally on dirt and I have also done gravel rides with it. I fully expect to use it in all of those capacities going forward as well.

I did make a change to this bike in 2021. I wasn't taking to the Carbon Jones Bar like I thought I might. That 45° bend to the extensions is a wee much for me. Then this past Summer a post by Mike Curiak concerning one of his bikes caught my attention. In that post he showed some Pro Taper carbon bars which had a decent amount of sweep but not a crazy amount like the Jones bar. So, I ordered up some for the Ti Muk 2.

I have to admit that these handle bars have worked out very well. (So, yes, I have some Jones Carbon H Bars for sale too) The 20° of backsweep is a lot nicer on my hands and the 720mm width is wide enough! I will likely be getting some cork grips at some point for these, but otherwise I am set on things to change on the Ti Muk for now.

Someday.....maybe....I will pop for a carbon fork for this bike. It would probably be a Salsa Kingpin with the Anything Cage mounts, but we will see. They don't exactly give those away. I do like that that fork has internal dynamo routing though. That would be nice since I have a dynamo hub on the Ti Muk 2.

Next: The Townie Project

I was actually in the market for some carbon jones bars! But after reading up on the 20/20 pro taper bar, it looked too interesting for me to pass up. It sounds like you've had a good experience with them so far. I'm excited to try them out on my karate monkey.

@Tomcat - I think that you will really like them for single speed. I plan on getting another Pro Taper bar at least- and if I don't sell the Blackborow DS, I may get one for that bike as well.