Canfield Bikes announced last week that it had redesigned its flagship DH bike with a new high pivot, multi-link rear suspension and 29" wheels. New Jedi 29 models are available by pre-order and run about $6500.00. Frame/fork/rear shock modules are also available. See the website for details.

Comments: I know I would never really be interested in a down hill bike, and maybe most of you reading this would not either. I only run this bit on the "FN&V" because it is another nail in the coffin for what used to be a commonly held belief just ten years ago. That being that 29" wheels would never make it on long travel mountain bikes. Not 'maybe would someday', no- the word was 'never'.

Well, as the years go by this thought gets more and more ridiculous looking, doesn't it? I mean look at the orange thing. Eight inches of travel? Are you kidding me? And to think many thought it could never be possible. That it was a 'joke'. Who's laughing now?

History is ironic and history has a lot of things to teach us. What 'they' say now days? Maybe ten years from now we will look back and know that whatever 'it' was is garbage thinking. In terms of cycling, what do you think is being said now that will look foolish or wise ten years from now? Maybe 29"er DH bikes will be a joke then. Hard to say.....

With the announcement of Andy's Bike Shop closing and the ending of my relationship there with the shop, the Riding Gravel Radio Ranch has been impacted negatively. The last two years with Andy as co-host has been wonderful, but with the changes in his employment status and with the closing of the business, I now am back to being on my own with the podcast and the recording of it.

So, you may have noted a break in the release of new podcasts. Honestly, it just never occurred to me that we weren't doing that anymore until recently. The events of late Fall with my Mother's death and the job situation have pretty much put my mind in other places. Podcasting hasn't been on my radar for a while now.

So, now that some time has passed I am starting to think about this again. I do have a set up here with which I can record podcasts and my partner in riding Gravel, Ben, can still post those up. So it hasn't been for lack of resources. I should be getting back on the podcasting horse again here soon, so look for news of Episode #95 coming soon.

A week ago the names on the roster for next season's six event series being put on by Life Time Fitness across three gravel courses and three off-road courses were announced. Interestingly, what was to be a 40 person series turned out to be a 60 person series.

No reasons were publicly reported for why this was the case, but one would have to assume that the overall response to the call for applications must have been robust enough that Life Time saw a chance to include more riders and make more money. Obviously, with Life Time Fitness' resources, adding 20 more riders is not a burden at all for the company, and having 30 rider fields for Men and Women probably looks a bit more exciting than 20 per gender. Especially on big courses like the Kansas one where 20 riders in a pack is nothing much to see.

Which brings up a question: Do these events keep other riders out of the way of the Pro/Semi-Pro riders chasing big money, or are they mixed in with everyone else?

The money factor really makes this a big question and how it is answered is going to be very important. Already some riders have noted that the prize purses versus the entry fees don't line up for most of the roster to come out ahead. If these riders on the 60 person roster feel that they have been impeded in any way by non-Gran Prix riders it isn't going to be seen in a good light.

This is another reason I feel this series' three events on gravel is not really 'gravel racing'. It isn't representative of where gravel riding/racing came from, and it is not representative of the gravel culture in any way. This is merely a big purse racing series that just happens to have a few of its events on gravel courses. It should never be confused with 'gravel grinder events' or be associated with the gravel scene in any way since it doesn't represent what gravel riding is about. 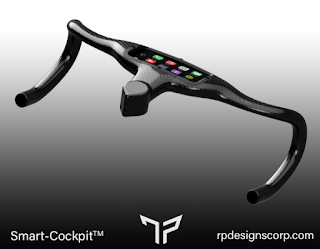 "Gizmodification" Of Bicycles Marches On:

Since the year 2000 or so it seems that humans are hell-bent on digitizing every aspect of life as we know it. Appliances as mundane as refrigerators and washing machines now have Wi-Fi connectivity. Heck, even a barbecue grill can be had now with Wi-Fi!

So, it was inevitable that some company would come along with the intentions of turning all our bicycles into "smart devices".

Meet RP Designs, who have a crowdfunding effort underway to produce handle bars, both in MTB and drop styles, with integrated touch screens compatible with major platform Wi-Fi connectivity brands. The company claims that, "The Smart-Cockpit™ is designed to make any new or existing bicycle Smart in minutes."

This isn't just for electrified bikes either, no- they mean to have everyone on this bandwagon. Their crowdfunding site claims that the founders thought it was bizarre that one could spend thousands on a bike yet have to spend hundreds more on accessories to make the bike useful.

Comments: First off, 'integrated' cockpits won't be super popular. Humans come in thousands- nay millions- of variations in size, shape, flexibility, and other considerations that a single, fixed stem/handle bar combination will find very limited appeal. That's a proven fact. So, the design has a serious flaw out of the gates.

And accessory items have been tried on bicycles to avoid aftermarket sales for consumers. There are two problems with this however; and they have to do with buying habits and retailers. First, buyers want to customize their bike in the way that they see fit, because a bicycle is an extension of their personality.  It is not seen as a utilitarian device for transportation. Many Europeans don't view cycling in this way- because for them, it is a way of life and 'just how you get around'- so why wouldn't you buy a complete, fully accessorized bicycle?

Then on the other hand, retailers want to make the high-margin accessory sales and pocket those profits. Retailers do not make money on bicycles, but they do make money on accessories and labor. So, a fully accessorized bicycle is a money-losing proposition for a smart bicycle retailer.

Next, technology for connectivity has been so fluid and fast changing that this may find itself out of date in short order. Then also you have the electronics themselves which would necessarily need to be waterproof, shockproof, temperature-proof, and dust-proof, which even our own smart phones have issues with. Not that it couldn't be done, but bicycles put certain stresses and situations on devices that a smart phone device wasn't really designed for. And this company wants to do this for mountain bikes, so this is a tall order.

Can this be serviced, or when it fails, is it just an expensive piece of trash with no way to recycle it? Yeah, this company has a big mountain to climb. It's interesting to see where they are coming from though. Is something like this the future of cycling? Will all bicycles be track-able, radio wave emitting, 'droid-like', robotic devices in ten, twenty years?

That's a wrap on this week's news and views. A scheduling note- This will be the last "FN&V" for the year as the holidays and end of year reports will necessarily push this normally scheduled post off for the next two weeks. "FN&V" will be back again in the New Year on January 7th! Thanks for reading Guitar Ted Productions!

One thing that keeps coming to mind as a wait for the future is a return to longer stems. Even on mountain bikes. This thing of short stems forever from a non math and science orinthologist is solely based on suspension travel creating high stacks in a given wheel size. Then on road bikes the casual rider not being interested in improved rider ability. Just look at motorcyclist and motorcycles, their geo has changed too- same, same. I say the old geo of long stems is not out and will return for comfort (all these tender handlebars are going to kill people- I said it) and those commited to growth over settling.

Something I think will seem foolish in coming years is the notion that "26 inch wheels are dead as the dodo". Yes I realise that right now 26 inch wheels are the cycling equivalent of the powder blue polyester leisure suit. Very much out of fashion. However I think they have some real advantages for gravel bikes. Think back to the early days of gravel. People thought 28mm tires were fine. Now everyone snickers at anything under 42mm. The problem with really wide tires on 700C/29" is that the overall diameter of the wheel becomes ponderous. I mean you're in wagon wheel territory. As the tire and rim move away from the hub you've got increased rotational inertia a theoretically weaker wheel and some serious compromises on frame geometry, especially in the smaller sizes. Dropping down to the 559 rim size avoids all that and brings the overall diameter back down in the 675mm range that's considered more ideal(even better than my much beloved 650B wheel size).

Interestingly enough, the company that's producing the 'Smart Cockpit' just bought Ellsworth Cycles. Apparently the Truth is going to be the first mountain bike with the technology.

I'll pass on that one… but it's a perfect fit for the Ellsworth brand.

I think "gravel" means different things to different people and different zip codes. Sun-baked limestone vs washboard sand and 1/2" gravel almost call for 28-32 mm vs 29+ as the ideal tire.

How did Canfield get away with naming a bike Jedi? Disney will be all over them for that.