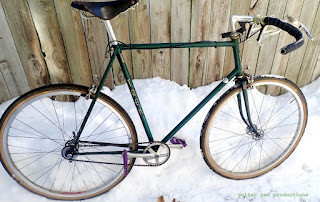 It's the end of the year and time to review what's up with the bikes I used over the course of 2021. You'll get a brief overview, any changes made, and what the future has in store for each bike listed. Enjoy!

Last January I pulled the old Trek road bike I had hanging from a hook for many years down and started to transform/restore/maintenance it into a 'townie' bike I would use for errand running. The bike formerly had a short life as a "Gravel Mutt" when I tried it out as a beater gravel bike. While the tire clearances were not the greatest, the thing that really was not much fun was that Trek- for whatever reasons back in the late 70's when this bike was made- decided a shallow bottom bracket drop was the way to go. Honestly, this thing feels like a cross bike. It's kind of ridiculous.

So, I stripped off all the dangly bits and went to the simplest form of bike- a single speed. The wheels which this bike had were not really what I had in mind and I came up with another plan when I rediscovered these NOS Salsa Delgado Cross rims in the Lab hanging from another hook down there. These were paired with some OG Dura Ace hubs, which were from the days of thread-on freewheels, and so that lent itself perfectly to the single speed idea.

Things went smoothly and I ended up with a much more useful (to me) bicycle. I still am not a big fan of the long, flat tiller of a stem and the handle bars, being older flared drops, are not my cup of tea either. All that will probably get sorted at some point, but the bike works and I do use it fairly often. So, it is a success story from the standpoint that most of the time I've owned this bike it has hung from a hook. That's not ideal.

Next: The "Other Townie"