I know that running an event on the order of a Trans Iowa sounds, on the surface of it, like a lot of work, an adventure, and exciting, but sometimes all of those things could not be further from the truth. I think much of Trans Iowa v13 exemplified this. And in a way, Trans Iowa was much more like a snow ball one rolls down from the top of a mountain. The resulting avalanche of  occurrences are at once fascinating to behold and completely out of the Race Director's control. When things go sideways, the best I could do was try to stay up on top of that wild horse. When things went smoothly, I had to force myself to stay awake, it could get so boring. But I had no real control over which way it could go at any given moment over the course of a three day weekend.

I probably could just use the above paragraph as a summation of all the Trans Iowa stories. But where's the fun in that? And we need to finish this story about v13, so I will continue on from that point where Matt and I were just about bored to tears sitting in a Subaru in an empty municipal baseball complex's parking lot in a steady, cold rain. 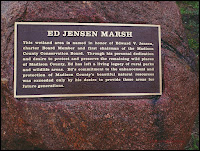 Once we had decided on moving again, it was partly out of being fed up with sitting in one place for so long, but secondly it was because racing activities were crackling back to life on my communications end. MG and I had word that the leaders were in town and so we had to move on. Word also came to us at around this point that Dan Hughes was pushing the pace with Greg Gleason not far behind.

We passed another covered bridge not far from Winterset, the Holliwell Bridge, and then the course meandered mostly Eastward from there which would take us underneath, as it were, Des Moines. The next checkpoint would be an unusual one in many ways, but before we got there,  at Mile 131.7 of the second leg of the event, there was a mile of absolute slop to navigate for the riders. They called it a "road", but there weren't many cars that could have traversed its muddy, rain soaked depths unless it were a lifted 4X4 truck or the like. There was a small nature preserve here which offered us a place to park, and wait......

If there were a recipe to make time stand still, I believe you would see that this recipe had no Sun visible, so- you know, you couldn't notice the Earth's rotation. You'd add in rain that never ceased, because, well, misery. And you'd put this experience in the most remote area you could so it would seem that nothing changed. Such was the place, the time, and such were the the conditions that day at the "Ed Jensen Marsh" in Madison County, Iowa.

I can tell you that there really is no reason to ever go to this place, as far as I can tell. I'll probably never go back to see it. But maybe that is because I felt like I spent an eternity waiting on Dan Hughes arrival to this forgotten corner of Iowa on a grey, rainy day. While we waited, it was quiet. Even Matt, who can carry a conversation on a long ways, ran out of things to say. We watched the rain fall, saw a small band of children having an adventure in the tall grass, and watched a 4X4 actually make that Level B Road all the way down. The sound of its roaring engine the only real outstanding sound above that of the wind and a faint rumble of thunder now and again.

Of course, Hughes finally did arrive. He was wet, looked cold, tired, and wasn't really very animated. He almost looked as though he was under a spell, his face having little emotion and his conversation was muted and short. We thought he looked very under-dressed for the conditions, especially considering that the temperatures were forecast to dip well down into the 30's. How would he stay warm when it was obvious he didn't have any thing else to put on? Concern lodged in my mind, as well as Matt's.
Our next move was to get around this muddy road by other means and arrive at Checkpoint # 2, a mere 15 miles from Jensen's Marsh. We were expected by 5:00pm, but we didn't quite know when to expect Hughes. Would he get bogged down by the weather and roads? Would his body start to let him down and go into hypothermia? Would his mental state crack and allow him the grace to quit this madness? That is what we went to Checkpoint #2 to find out.

I think about TI-13 every time I ride or drive by that marsh. There's a really nice, old, elevated rail bed on the north side of the marsh, in sight of the B-road those riders went down. It runs the length of the marsh and drops them on the same road at the end. :)

@S. Fuller - Yes, I recall that trail as well. I believe the reason I didn't use it was that the cues to get someone on it were going to be a bit confusing without a bunch of signage/staking and I was trying to avoid that.

Besides- there was that swampy, mud-pit of a Level B Road right there- Why not? ;>)