Last August my Lezyne Super got crushed in a mishap at Gravel Worlds. The search was on from then to get a GPS compatible computer for use on my adventures.

Last September in this "FN&V" post, I mentioned the three GPS compatible computers that I was looking at. I ended up telling Mrs. Guitar Ted not long ago that the one I picked would be a great holiday gift for me. She concurred and so she purchased a Hammerhead Karoo 2 GPS computer for me. It arrived last Friday. This experience will be documented here as I get to know this computer and use it. I will comment as this review progresses.

Why A Karoo 2? I landed on the Karoo 2 because it seemed to me to have the easiest to use UI (User Interface) and for me that is really important. Secondly, it is a nice size, and the graphics are color, and the display was said to be quite crisp and easy to read. Another very important point for me. Finally, I liked that the Karoo 2 had audible navigation prompts and that it did not require my phone to work that feature.

The price is reasonable, and the company upgrades the unit's software on a regular basis. Also good points as I looked at this. Things I didn't like? Proprietary mount, (although there is a way to use Garmin-type mounts), it is a new company on the scene, (I don't have a track record to rely on), and subsequently this isn't a product with long term use out there either.

First Impressions: The box is classy and the packaging is well thought out and largely devoid of anything you cannot recycle. In fact, there was very little other than cardboard here. Nice! While this is a rather fleeting thing to be happy about, it does matter to me that a company doesn't generate more waste than it needs to and what it does is recyclable.

Secondly, the unit is.....well, not really all that impressive. I mean, we've all seen smart phones and devices that resemble a smart phone. The Karoo 2 is just another device in that it has a very nice, sleek, 'smart-phone-like' look. You can refer to the image above for size. That's an iPhone 12, just a stock issue one, not a Plus-size or a mini, so you can see that the Karoo 2 is somewhat smaller than that. It is thicker than an iPhone buy about 2.5X's. You can see also that the Karoo 2 is quite a bit larger than my old Lezyne computer as well.

Start-Up: I grabbed the "User Manual" and checked it out first. If you get one of these don't bother reading it unless you want to understand all the warnings and stuff about batteries, etc. That's all that paper is worth. The real set up and 'manual'. if you will, comes as you get taken through the unit after power up. But first, right when you turn the unit on, it updates itself to the latest software. Cool!

I should mention that on the Hammerhead site you can pre-set up your unit after you order it. I did not do that. I waited until the update was done, (about five minutes, probably less), and then the unit walked me through, well......it walked Mrs. Guitar Ted through the set-up. She grabbed it at about this point and did that stuff for me.

Not that I couldn't do it, but she is the tech-person in this relationship and well, she took over! Not that I mind, it's all good with me. But at any rate, it seemed to go without a hiccup for her until she handed it back to me when it came to preferences and whatnot. At that point I was prompted to add maps, choose how measurements were done, (metric, Imperial), and to add any apps I use. Simple enough. 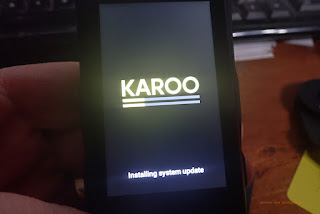 Once I chose all those things the system updated and it was ready to use. there is a virtual 'tour' of the functions that the Karoo 2 has which I went through. This, essentially, is the user manual.

The UI for the Karoo 2 should be pretty intuitive for anyone that has a smart phone. Swipes and touch screen keyboard inputs, and four buttons on the case are how you navigate the Karoo 2. The touch screen is very sensitive and I had no issues with getting swipes and keyboard inputs to be recognized. In that way it seems to be on par with my iPhone experiences.

The Karoo 2 allows you to add in your 'Rider Profile" and to input record keeping on any number of bicycles you want to add. This is rather useful for me as I have several bikes which get ridden throughout the year. I could have a 'stable' of bikes with my old Lezyne computer, but it would only hold information on four bikes. For many folks, that's plenty, but for myself it was limiting.

It may be that I don't use many of the bike profiles and if I do not, it will be because I only have the one mount I can use now. I could swap the mount, (tedious, not very likely I will keep up with that), or I could see about getting some Garmin type mounts, which might be cheaper than the Karoo 2's mount. It also may be lighter and more compact too. That Karoo mount is a chunk! But the unit weighs 330+ grams too, so I get it. You definitely do not want this thing falling off your bike! Speaking of which- The Karoo 2 has a lanyard which you can use as a sort of safety in case the unit decides to jump ship.

So Far... I had a bit of difficulty with the Hammerhead online dashboard as it was giving me fits concerning a password. Their self-generated one, which I chose, did not work. Then I asked for a code to input my own password which they said was going to be e-mailed to me and I did not see an e-mail. (Checked spam folder, nothing!) So, that is an outstanding issue yet.

Otherwise I have no problems so far. The unit itself is easy to navigate, once you get by the intimidating first steps of figuring out what to do first. To be fair, the online site is a better way to step into ownership. Flying by the seat of your pants with the out-of-the-box experience is a bit tough at first.

The screen is bright! It seems easy to read so far, but I'll get back to you all once I've ridden with this thing. It seems to start up fairly quickly, mine took about a minute to fire up. It acquires a satellite signal fairly quickly as well. My Lezyne could take up to five minutes sometimes. The altitude setting can be manually input, but I chose the automatic set up and it came out spot on. So, everything seems to be pretty good.

Maps were acquired via the cloud and I have not checked those out, but there again- I will be doing updates aplenty here on this unit as I go along. So, stay tuned for more on the Hammerhead Karoo 2 to come! In the meantime, if you have any questions, fire away.

Note: The Karoo 2 is a Holiday gift from my wife and Hammerhead has no idea I am even doing this review to my knowledge.

I am going to follow along with this one, as I bought the original hammerhead and instantly returned it once I opened the box and picked it up. Remember the OG iPods in the metal case? It pretty felt exactly like the big 256GB.
It does appear Karoo has corrected that issue and I always like seeing new competitors enter the market. This is generally what pushes the evolution of products.