It's time for the next update on this new GPS computer unit I have now. Part 1 can be seen here.

In this part I will relate my first ride experiences and talk a little about impressions I got from the unit's use on an actual ride.

First of all, I noted that the size of the Karoo 2 head unit is such that it may impact your ability to attach other accessory items. Due to how my handle bar transitions from its 31.8mm clamp diameter to the flattened tops section, I have little room either side of the stem to attach things. Also, the Karoo 2 is set up to be centered on the stem's centerline. Between that and the size of my light unit, there wasn't enough room to run both items on my bike. The light had to go then.

In a pinch I could offset the Karoo 2 to the right by clamping the Karoo mount on the right side of the stem which would make plenty of room for a light mount on the left. Not elegant, and not for the "OCD" amongst us, but what else can you do but perhaps find alternative mounting options for the light head? I'll cross that bridge if I have to later.....

So my only other GPS experience has been with my old Lezyne Super GPS unit. You may not relate to some of my comparisons then, so keep that in mind. The start-up procedure is pretty fast and I was ready to go- from dead, blank screen to riding page armed and ready- in under two minutes. It could take that long, and usually longer, for the Super GPS just to acquire satellite signals!

For this ride I chose the "Got Hills?" page which is the page which reads out elevation, current degree of climb/descent, and overall elevation gained. The page also can be swiped to a navigation page, which I will show later in this post. You can see above what data I can see during the ride and it is updated continuously during your ride. Ride time is on the upper left and battery level and time of day are in the upper right in the yellow bar.

This was a Sunny day, albeit that super-low angle Sun you get near the Winter Solstice around here. That said, I could read the screen just fine through my Rudy Project glasses. The screen brightness is adjustable, by the way, and this here is at 83%, which was the factory setting.

Also, I was pleasantly surprised that I could enter data and swipe with my gloved hand. I was using a GORE Windstopper glove with a touch-screen compatible finger. It worked great with the Karoo 2's Dragonglass screen. It doesn't always work on my iPhone, by comparison, so that was interesting.

Here above you see that I have stopped and taken an image of where I was at with data at that time. You get a cool historical graph of your ride as you go. (I always knew Aker Road South was mostly uphill!) The amount of elevation gain was somewhat of a surprise, but it was cool to see that number get racked up as I rode. The grade read-out is interesting. While I found it to be reasonable, it doesn't track right on with where you are. For instance, after a slight downhill, you can tell by pedal pressure when the grade starts going up again if you are paying attention. Well, I would find that I was pushing into the pedals harder, indicating I was on an ascent, but the unit might still be tracking the descent and reading -1 or "0". So, it takes a moment or two for it to start tracking your uphill progress, but I suppose that is accounted for by the delay in getting a signal up to a satellite and back again.

I should also mention that the unit has an "Autopause" feature. When I stopped it took a moment but it went into Autopause pretty quickly. The user can set a threshold speed for ride reactivation. I left mine at the factory setting which was "0" mph. I can see where you might want to set it for 2mph or 3mph to account for pushing your bike around at a coffee stop, for instance.  Ride data started compiling immediately after I mounted up again to ride. I was pretty pleased by this aspect of the Karoo 2. 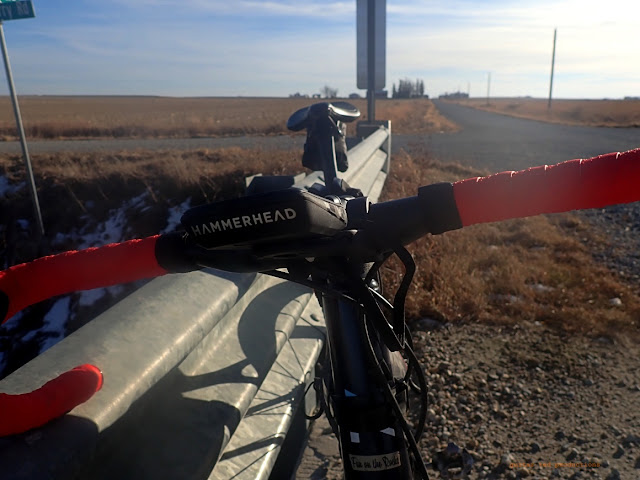 Speed seemed spot on as did my elevation, which wasn't a read-out, but I could see on the graph where 1000ft was at and the unit tracked pretty much spot on to my historical data which I gathered with the Lezyne. So, I feel that the Karoo 2 is reasonably accurate in this regard.

The unit was rock-solid in its mount and there were no vibrations or slippage despite some sections of my route having big, chunky gravel everywhere on the roadbed. I would completely trust the chunky, plastic mount as it seems pretty overbuilt and the clamp mechanism was really grippy and tightened up well. The unit releases with a slight clockwise twist and forward movement, so I wouldn't expect there to be any issues with premature release of the head unit while riding.

Navigation can be accessed by swiping right or left on the screen and a current position and map comes up. Your ride track also shows here as well. I was pleased to find that by using the universal 'pinch' move on the Karoo's touch screen it allowed me to get a bigger overview of my area or to pinch in for a more detailed look.

This could come in handy if you run into a bridge out, road closed, or other situation where you might need to reroute. I was pleased to see that the contrast between roads and surrounding areas was easy to discern. It is a royal pain in the patootie on an iPhone to see roads on the maps you get in the Maps app. I would still bring a paper map of any area I was unfamiliar with though, as road names are almost non-existent for the gravel roads where I live on the Karoo maps.

So Far...  I am pretty pleased with much of this unit. I should also update and let you know that the password issue I had with the dashboard online was resolved. The site did not update as I was on it, but when I returned later, the site had the new password I was trying to enter. (??) Anyway, it works now....

With that out of the way, I need to dig deeper to see if current elevation can be added to the data screen. I also have to go on another test ride to check out my "No Sensors" page which is where I would go for a screen that reads out current speed, time, and that sort of 'normal' cyclo-computer stuff. Then I want to create a route, set it up for turn-by-turn navigation, and see if that works.

I also had this unit set up to be Bluetooth connected to my phone and all notifications I receive on my iPhone are now pushed to the Karoo 2 if I am using it. This worked out swimmingly as I received a couple of important family related text messages and a weather warning on my first test ride.

Now I did forget to choose a specific bike to record data to, but fortunately the Karoo 2 defaulted to the first bike on my list which just so happened to be the bike I was using. Whew! Saved by my random choice! Speaking of data, there are pages for power, and indoor trainer riding, but these will be completely lost on me as I do not engage in, nor do I have the equipment for such pursuits. So, if you were hoping to see if I would be using power data and indoor trainer data, well, I apologize. That isn't anything I'm interested in.

Okay, more as I get chances to use this unit through the Winter.

You can definitely display current elevation on the Karoo 2. It sounds like you're using a default "profile" (the set of screens available to you when you're riding). This page tells you how to modify an existing profile and how to create one from scratch:

@Fear rothar - Hmm.... That looks nothing like what my Karoo 2 shows me when I look at the profiles. That doesn't seem to be helping. Sorry!

I can only surmise that you misread or missed a step. It's been almost a year since I created profiles, so this wasn't fresh in my memory. However, I just followed the directions on that page to both create a new profile and to modify one of my existing ones and they are mostly correct. However, the text accompanying the third screen shot does not reflect the current/latest firmware update that contains the "Control Centre". Instead of swiping down or long pressing to see the available data screen layouts, there is now an "Edit layouts" button at the bottom of the screen.