Neglected But Not Forgotten: Part 4 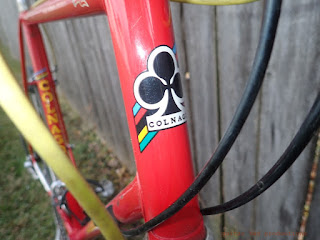 I posted about a couple of my bicycles which I had left sitting for far too long without a ride. Well, those aren't the only two bikes with that issue! Far from it! I have a LOT of bicycles, you see, so it becomes a bit of an issue to throw a leg over all of them in one calendar year if  I have review stuff to do and , well, ride all this gravel around here. Someone has to do it!

So, here's one that I would be surprised if many of you that read the blog would know about, or guess I would own. Obviously, it isn't a gravel bike, or is it? (A debate for another time, perhaps) I think I need to explain the existence of this bike in my stable for you all though, and with that.....

The origins of my acquiring this bike are somewhat clouded to me, mostly because I bought it so long ago now that the details of the transaction have been forgotten. I'll tell you what I know, and a bit of my history with this bike, and then I'll bring it all up to date at the end here.

Obviously, this is a Colnago racing bike. It is a "Super" model, and I was told it was from 1984. I do know that Supers were built the same, or similarly, for years, so dating one usually comes down to the components, but this old road dog had long since lost all of its original equipment by the time I laid hands on it. I do know, however, that it originally had a curved, not the straight legged, steel fork, which dates it before 1985 (according to what I have heard) or so, therefore I am calling it an '84 based upon that and what I was told back when I got the bike. But whatever....it is OLD!

The original fork was chrome plated steel, but it was soooo rusty that I, and those at the shop at the time, decided that it was unsafe to use anymore. See, the owner before me used this as his Winter hack, you know? When people still trained outdoors? So, he had ridden this through salt and snow for years and neglected to really take care of it. Although at one point he had the bike repainted and re-decaled. So, this is not the original color of the bike- another reason it is hard to date this one.

So, back in these days I was more into road biking than I was anything else. This was before I was back into the bicycle business, by the way, so maybe around 2001-2002 was when I got this bike. I had two other road bikes at the time. I know! Weird to think that, right? Anyway... All my road bikes then were Campy equipped and I essentially had been buying old parts when the owner of Europa Cycle & Ski upgraded to new stuff. That's mostly what this Colnago is. There is another bit on the bike that pre-dates all of that though, and that is the hubs and rims.

So, at my first bike shop job, I acquired a set of Campagnolo Record hubs, brand new at the time, so 9 speed, if I recall. I also picked up a pair of Sun Mistral rims which were polished silver. These are impossibly narrow aluminum rims in light of today's standards, by the way. Anyway, I laced these up around 1999, 2000 using a 2X pattern, which I rarely ever do, but I was trying to be all ligtweight and whatnot!

So, at any rate, I believe the story was that this Colnago was traded in to Europa and I happened to see it one time and the owner suggested it fit me and maybe I should buy it. Anyway, I got it, obviously, and I set it up with those wheels I built and the second hand parts I acquired. So, it is kind of a mish-mash of Campy stuff, mostly 9 speed era parts, and the only exception to that is the rear brake, which is a Suntour item which the bike had on it when I got it.

The fork, which had to be replaced, was thrown out, and I got this Profile Carbon fork, which at the time was about as cheap as I could stand to go. The seat post and the water bottle cage are American Classic items. (ONE water bottle cage? What were these guys back then, camels? ) I have a no-name 1 1/8th stem on there which is wrapping a shim to fit the 1" steer tube. The saddle was from my ancient stash of MTB stuff, a SDG saddle, and the original tires were Continental GP 4000's .

I rode this for a bit. I remember a "GTDRI" ride I did on it to a family reunion in New Hampton, Iowa. I also rode this one on the 2003 RAGBRAI route, that is until I got the call that my son was to be born. Then after this I think the bike went into mothballs as 29"ers, and then gravel bikes, took over most of my riding.

So, I finally got this back out and decided to swap out a few things.The handle bars were some ugly Dimension ones I put on back in the day, but I have replaced those with a set of Salsa Cycles Cowbell bars. The tape is some no-name synthetic black cork tape, and I have the SILCA tool roll under the SDG saddle now for repairs.. Tires are the new WTB Exposure - supposedly 32's- and these barely clear the Profile fork, (which I will address here shortly). On my first test ride I discovered that the head set was loose and the chain broke! 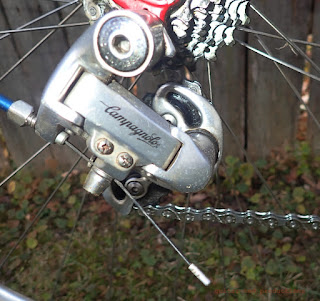 So, I installed a new chain, and I dug into the wonky plug Profile used to pre-load the head set bearings. After much thought, I came up with a slight modification to their poor design which allowed me to actually tighten the preload down enough to prevent a loosening head set. (We've come a long way with how we do things, let me tell ya!)

The bike is rideable now, but I am going to search out a steel fork for this. The Profile carbon fork really isn't 'right' on this bike and a steel fork should afford me juuuust enough clearance to get the WTB tires to work on this thing. I also am going to see if I can swap over to some shiny, polished Velocity A-23 wheels I have. I am going to see if Velocity has a Campy compatible free hub and if they do, my thought is to convert the hub I have, and see if the slightly wider A-23 won't lower the crowned out profile of these WTB tires on the Mistral rims. Those rims, by the way, are 90's technology and they bend like butter. You have to be really careful riding these things. So, a swap over to my A-23's, which are not being used now, would be good. Then if that worked out I would re-lace the Record hubs into some other wheels.

Okay, that's it for the Colnago for now. If I make any more headway on this one I will return with another post.

Oh how I lusted after one of those straight fork Colnagos in the late eighties! Knowing what I know now I don't think you could run fast enough to give me one, haha. They were beauties though.

Same here, always wanted a Colnago Master with the steel fork but never could find the right one, ended up with a Merckx. Still use it as my main road bike. Had it all murdered out but recently dug out my old Dura Ace 7700 parts and had some Pacenti Brevet wheels built up. Looks great with all of the polished silver parts. I can barely squeeze 28's in it, the fork is fine but the rear brake is the limiting factor. Rides great.

I lived in Sicily from 1989 to 1992 and there was a small bike shop on the next block over from my apartment. The walls were lined with Colnago frames, with the owners Record equipped Colnago often parked just inside the front door. In my mind, it was like walking into a Ferrari dealership. I had every intention of having one of those frames built up, but then one day a new guy from Pensacola checked into our shop and he and his wife had Giant mountain bikes. I had never seen a mountain bike up close, let alone rode one. While his bike was too big, he loaned me his wife's bike and I discovered I was a block away from endless tractor and old goat paths running through the blood orange groves and around extinct volcanic craters surrounding the town. Mount Etna filled the northern sky and on a clear day, I could see the Mediterranean. I promptly ordered me an Access Pro equipped with those newfangled Deore DX push/push shifters from the Supergo mailorder shop and never looked back.

Looking back, I do wish I would have had one of the Colnagos built up. When I first moved out to Oklahoma in 96, I rode with a guy that had a Colnago mountain bike frame he built up and have never seen one anywhere else. It was actually heavy compared to my steel Stumpjumper, but man oh man, it sure was pretty. It had some funky shaped tubing.

It is interesting to read your comments today. I remember once talking to a brand rep who had spent time in Europe as a rep as well. He mentioned how every European lusted after a Trek OCLV carbon road bike and how in the States it was all about having a Colnago.

I don't know if that was necessarily true but if it is, it would be a great "The Grass Is Always Greener On The Other Side" story.