Coming To An Endurance Event Soon! 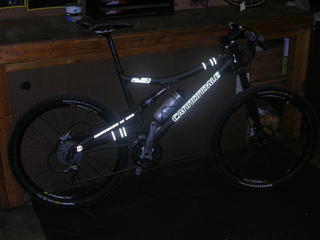 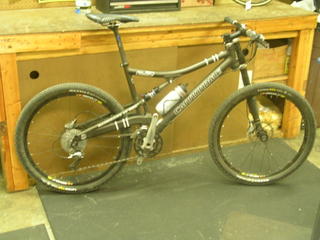 Today our Cannondale rep stopped by with the much anticipated "marathon" bike that he's been teasing me with for over a year now. Say hello to the "Rush" marathon/ endurance bike! This is the third bike model down from the top of the line team model. There are a couple lower models than this one. This baby pictured here runs at a msrp of $3400.00. That's right! You probably won't see this in the secret underground labratory of Guitar Ted. Too spendy for me. So I thoroughly enjoyed thrashing around out behind the shop on this sled today! Mr. 24 even took it for a spin, but I'm not even sure he can speak of it, since he is sponsored by Giant. Let's just say he wouldn't turn down an opportunity to thrash one for a full 24hrs!

What did I think? Well, I haven't really ever been on anything dual suspended that was made in this century, so anything would be a revelation to me! In fact, just about everything bolted to this bike was a "first time" for me! Call me a retrogrouch, and you'd probably be right! But I'm not so dumb that I could step into something new and deny the bennies. So, let's see....tubeless tires- good.....flippy shifters- whatever!.....hydro brakes, good.....Lefty fork, decent......platform technology rear shock, it worked.......Oversize handle bar, and stem- again,whatever! .......2 piece crank/bottom bracket, awesome! The bike overall worked as advertised. Four inches of plush travel. What does that mean? Let's put it this way, curbs disappeared as if they were not there. That's plush in my world! Then again, it could be a Stone Temple Pilots song! Ha! I think this would make a very good 24hr or endurance race platform. It's got a single pivot, (I did get it to "kickback" which is a downfall to this design.) it's spec'ed with durable parts,(mostly XT stuff), and it weighed in at 26.5 lbs, with water bottle and cage.


Plus, you get the added benefit of reflective graphics! How can you miss? Well, it may not be perfect,....it is, after all, a twenty six inch wheeled bike! Make one in the adult wheeled size and you'd really have something! A "leviathan" of sorts!
Posted by Guitar Ted at 4:47 PM

Gee-Tahr,
for the udult wheeled dually take it from Papa Vinnie and get the fisher 292 or 293. Vincenso says you can run over all sorts of stuff w/ it.