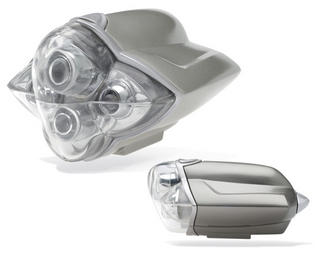 Well, with the recent Trails Festival Night Ride recently run, I thought I'd post up a review of a typical "commuter" type headlamp that is currently available. On tap for today is Blackburn's entry into the currently hot market of LED lamp technology. The big deal here is that the lamps don't ever really "burn out" since they don't work in the same manner as a typical incandescent bulb. Battery life is also much improved. So, sounds pretty cool, huh? Well, all is not well in LED land, I'll be the first to tell you!

I have been pretty pumped about LED technology for awhile since the benefits and potential is huge. Pulling the whole enchilada off in one package has been pretty tough for most entering into this new arena of light technology, though. I've been disappointed on more than one occaision, and what's more, it's not always the quality of light that is the downfall!

As for today's subject, we have a very promising LED light that, despite it's wierd styling, has a brilliant white light that promised to be a contender to the Cat Eye EL-500 light that is currently the king of commuter lights as far as I'm concerned. In addition to the constant beam, the Quadrant features a couple of flashing modes that, other than extending the battery run time, are essentially useless. By the way, battery run time on steady mode is estimated to be over a hundred hours! Cool! The battery compartment is accessed by using a small rubber thumbscrew that is cleverly designed into the case at the rear of the light. Batteries are included, and mount easily. The quick release handle bar mount is really quick release, and is easily adjusted via a thumbscrew to different handle bar sizes. ( Question- why do we need so many different handlebar sizes?! A possible rant, eh?) Anyway, handlebar size is not an issue with the Quadrant. The main light unit then slides onto the bar mount, and clicks into place. However; I had a HUGE issue with this interface! On the first outing, my normal route home, I lost the main unit off the handlebar an amazing THREE TIMES in about 100 yards!!! These were normal jolts that I feel any light system HAS TO HANDLE in order to be usefull to anybody. One was a typical drop off a curb to a street. The other two were on a section of rough, broken pavement. Nothing unusual. All done at about 12mph. I had to cease the test on the first ride! I was bummed! I will say that the Quadrant took three HEAVY hits and it didn't faze the operation of the light one bit. In fact, the only damage was to the case, as it got scratched up sliding and bouncing off the pavement! Impressive! If Blackburn would re-evaluate that nasty mounting interface, they probably would have a contender here. As it is, it's an utter failure as a usefull piece of cycling equipment. Too bad!

I had an inkling that this might happen, as I had a similar experience in the shop a couple days before hand. I mounted a couple of these lights on a pair of customers bikes and I accidentally knocked both of them off the bar mounts with a slight lean into them while I was adjusting some other bits. Strange, I thought, but now I know why. Blackburn needs to get this fixed, or you'll have to take it WAY EASY on the smooth bike path to get any use out of this puppy!

Well, enough about that! Guess I'll be going with the most excellent Cat Eye EL-500 as my undisputed king of commuter lights! You should too!
Posted by Guitar Ted at 8:51 PM