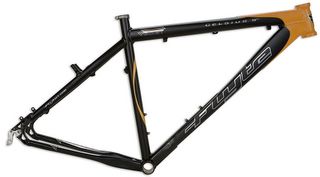 The Airbourne Bicycle Company has had to change it's name, due to a licensing agreement, to Flyte Bicycles. Okay, now that that is out of the way, we can get to the really important stuff!
The once promised, then nixed 29 inch wheeled aluminum hardtail frame is now available! What's more, it's only 399.99! This is great news, as the 29 inch world is chock full of single speed hardtail choices, but very few geared frames. The geared frames that are available are usually custom ones, which isn't bad, just not budget friendly. Now it will be possible for anyone to swap over most of their existing drivetrain parts, get a fork, and a wheelset, and have a 29 inch wheeled bike to check out for less than a grand. Of course, you could also choose one of Flyte's complete bike kits, or get a complete bike under a grand from Fisher. The choices are starting to proliferate, so if you've ever had a hankerin' to check out the larger wheeled format, now's a good time!
Posted by Guitar Ted at 7:37 AM