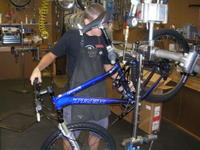 The bike comes out of the box almost assembled, but we do several checks, and test ride the bike before the customer
gets thier hands on it. 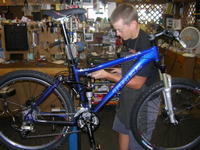 Jeff made several adjustments to the bike's suspension, based
on the customers, ahem!.....measurements!


We were pretty impressed with the parts spec, and the minimal test rides we got. This bike seems pretty dialed in for what it's intended use is. That is, long, epic trail riding and endurance events. While it's not XC light, it's pretty stout, and I thought it pedaled way lighter than it was. Of course, that might all change if things got more vertical. However; the tires seemed pretty grippy, so as long as you can turn over the cranks, this thing should haul up a climb pretty well. I thought the suspension felt a little more "bike like" than the Cannondale Rush I rode a week or so ago. That bike felt a little more dissconnected to the ground than the Trek. Both are great bikes. The Cannondale had a great parts spec, and the Trek was less money, but still pretty good. In fact, you could buy 1.5 Trek Fuel EX-7's for the price of the Rush we saw. (Not sure if you can buy half a bike!) To be fair, Cannondale has less spendy Rush bikes. ( sorta like a cheap high!)

Well, I don't expect Mr. Saul to be hangin' around the shop much for awhile! That's for sure! Enjoy your new ride!


Check out the coversation going on concerning this morning's earlier post on the Trek "69er".
The veiwpoints vary, and it's interesting to see that the concept is not immediately understood. It's another reason that Trek may want to reconsider issuing this bike to the public. (And they thought that Fishers 29"ers were hard to sell!)

The "Big Announcement": Well, to one young fella, anyway! I decided that the bike I loaned out to Jimmy this weekend for the race at Ingawanis fit him so well, that he had to have it! I made him a rediculus offer to take it off my hands, more so that he would feel some ownership in it. I suspect he is still in shock over the whole thing, but he really seemed to enjoy the rides he got in on it, so what the heck! I wish him miles of smiles, and I am glad to see someone getting some use out of that sled. Go Jimmy!

So, here's to two new mountain bikers out on the loose! Ron and Jimmy will be tearin' up the local trails soon, so look out for them and say hi!
Posted by Guitar Ted at 7:32 PM