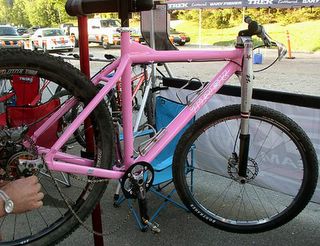 There has been alot of experiments done recently involving the use of 29 inch front wheels on a otherwise traditional 26 inch rear wheeled hardtail bicycle. Of course, you wouldn't normally see such a thing. Namely; a bike with two differing wheel sizes, unless you had just traveled into the future from the 1890's. I am not an advocate of such a setup, but I will try to impart the percieved benefits of such a bicycle.

First, the idea is that a 29 inch wheel is harder to spin up to speed from a stop, or from a slow speed to a faster speed. This is fact. A larger diameter wheel, with a large, fat tire on it will take a litlle extra effort to spin up to speed. What most people do not talk about is how that same wheel has a tendency to want to keep spinning, or hold it's momentum. Additionally, the larger wheel has somewhat better gyroscopic tendencies, as well. So, to re-cap, the big wheels spin up slower, but have better stability, and carry more momentum than smaller wheels.

Secondly: The 29 inch wheel is better at rolling over trail obstacles than it's 26 inch wheeled sibling. This is fact. The "lower angle of attack", or the effect of the larger diameter of the 29 inch wheel causes it to roll up and over stuff with less deflection of the wheel. You percieve this as a smoother, more stable ride. Think of it this way; your car would have a very difficult time getting over a parking barrier. By putting yourself in a four by four, with 36" tires, you can walk right over that barrier. The tires are bigger, so they don't bump into the barrier and bounce backwards. The bigger tires, with it's lower angle of attack, rolls up onto the barrier, and over it. Got it? So, to re-cap, 29 inch wheels roll over stuff better.

Now we come to this mix of the two wheel sizes. 26 inch and 29 inch wheels. Why? Well, the prevailing wisdom here is that you gain the benefit of the big wheel by putting it on the front, where it will roll over stuff better. (I guess we won't worry about the back wheel, it'll just follow along- right?) The benefit of the 26 inch wheel in back is that it is easier to spin up to speed. This is supposed to be the best of both worlds. I say, it's a misunderstanding of the 29 inch wheeled bike. Here's why.

The smaller back wheel, while retaining the good spin up factor, does not roll over stuff better. Less comfort, less control. Also, a 29 inch wheel has an elongated contact patch with the ground. (Another effect of the larger diameter) This gives much better grip than a comparably sized 26 inch tire. Wouldn't you want better grip and comfort- especially on a single speed? What about the spin up factor? Well, this is where most people don't get it. You just cannot ride a 29 inch wheeled bike like you do a 26 inch wheeled bike. You have to re-learn a few things. Namely, how to conserve your momentum. ( I'll get into that on another post!) Finally, I really wouldn't want to carry two different sized tubes along for every ride, or have to invest in two different tire standards for one bike. Especially if I'm just getting into mountain biking, or am on a tight budget.

My conclusion is, that while Travis' bike is a single speed Trek, pink, and has cool sliding drop outs, it is not something I would invest in. Don't make this bike, Trek! If you do something, do a full-on 29 inch wheeled bike, or 26 inch wheeled bike. This compromise is a bad idea. VERY bad!
Posted by Guitar Ted at 7:17 AM