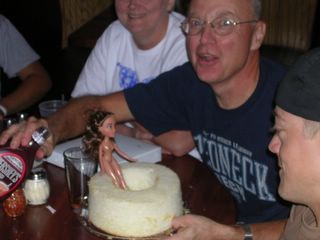 Wow! What can I say! There is so much going on here. I'll leave it up to you.
Guitar Ted Productions

Tonight the Europa Cycle and Ski staff held a small party to honor the services of John, who we know as Whizbang. He is officially done at the end of the month, so we're a little premature in booting him down the road, but hey! What are co-workers for, anyway? I'm not even going to start commenting on this photo, and no- don't ask me what Mr.24 is looking at! I don't think he knows either! HA! Anyways, a big Guitar Ted Productions salute to you, John. You'll be missed!

Notes from the Sea of Web: 1. I recieved a very nice e-mail from Gary Fisher today. He was relating how he felt my take on Trek Show was "right on". He also appologized for the lack of info, but promised that things are looking good for '06 and beyond on several fronts. Cool! It also would appear that the Fisher Rig was a huge hit amongst the single speed crowd as the event saw a ton of them at the Single Speed World Championships held in Pensylvania over the weekend. I am going to give Gary a huge thumbs up for taking the time out to communicate with me! I was impressed!

2. I got a question here on the comments section that I'll address here. It dealt with the disc vs. linear pull brake argument. I am a big believer in keeping things light, and simple when it comes to my bicycle. That said, I do run Avid BB-7 disc brakes on the Monkey. I feel that they have undoubtedly saved me more than once during commutes to work in less than ideal conditions. Linear pull brakes of high quality, used in mainly dry conditions will do you no wrong. However; if your running anything that has major downhills, mud, creek crossings galore, or in rainy, wet, and snowy conditions, linear pull brakes just don't match up to disc brakes. Choose your weapons carefully my friends!

3. I got a comment dealing with the "Someone is Watching" post that said, yes! we are watching you!. Well, thanks! I guess. Apparently this blog serves a functional purpose after all. Look for more bicycle related industry diatribe as it formulates from the slimy crevasses of my cranium soon! Say it with me: I am a tool!...I am a tool......

4. And finally.............. This is something that really gets to me! (Rant mode....AGAIN!) I got a call from a local cyclist at work today relating how all his bicycles have been stolen! Talk about ripping the heart out of a guy! What do you say? I tried to be supportive, but I know...Iknow that there is nothing that can assuage that man's pain right now. I only hope he'll rise from these ashes to pound dirt once more. These bikes were cherished treasures. You might have an inkling how that feels. Maybe you have gone through something like it. I just don't know, ya know? I just hope I don't ever see someone else riding those bikes. I know what they are, so it would be easy for me to spot them. Why don't I want to see someone riding them, you might ask? Well, it'd be just too tempting to lay the smack down on 'em, that's why! These people that perpetrate such crimes are akin to horse thieves, and worse. BAH!

What do you mean, what am I looking at. Geez, check out that fine bottle of Hersey's syrup.