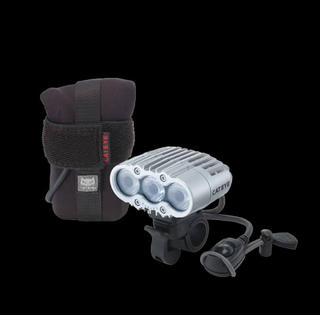 Mr. 24 left me a Triple shot set up to show my last "Mondays With Mark" class, so that left me with no other choice than to use it to ride home with!

One of the really cool things I noticed right away is how the light mounts. The main unit mounts to the very same handlebar mount that my EL-500 uses. That would mean that I could use either light, as conditions dictated, or that I could buy extra mounts to put on other bikes. Cat Eye sells the mount seperately, if you need one.

The next thing I noticed, again, is how small the battery and light housing are. I mean, I've seen these before, but I'd forgotten just how small they really are. Well, that's a good thing, as the unit isn't clunky, and weighs less than my ancient Turbo Cat lights.
They mount up in a jiffy, with an elastic band/ cord thingy that is used to mount the switch to turn the unit on or off. I suppose you could get the switch mounted to anything round- handle bars, stem, or top tube, if you wanted! Same with the stretchy, velcro battery strap!

When it came time to ride home, I was blessed with the brightest, white light that I've had the pleasure to ride with. Absolutely no dark spots, weird reflector patterns, or lack of coverage. The beam was wide, consistent, and was powerful enough that I didn't feel sketchy on my 20 plus mph descent of "Water Tower Hill". ( along University Avenue, by Hardees, for you local-yocals!) In the darkest section of my commute, down underneath University Avenue, near it's junction with Highway 63, I found that the light would indeed be excellent for single track use. It's a little rough here, but the mount held firm, and the unit did not vibrate, or wiggle a bit.

I'd say that this has the potential to be an excellent off road trail light system. I do not know what the recharge protocall is for this system, so that may change my view of this system somewhat. However; as far as using it on the bike goes, it's a snap! This thing has great light color and output. It's waaaay more light than a commuter needs, but can you ever really have too much light? As for off road lighting goes, this unit would rock! Pair it up with a Double Shot set up as a helmet light, and go coon hunting! You'll have all the light you would ever need, in a color that is easy on the eyes!

Well that is my initial opinions on the Triple Shot light. Great light, and I look for even better stuff to come from Cat Eye in the future! Watch out! Thanks to Mr. 24 for his generousity in lending me this unit to try. Thanks Buddy!
Posted by Guitar Ted at 7:18 AM