Don't Stand So Close To Me! 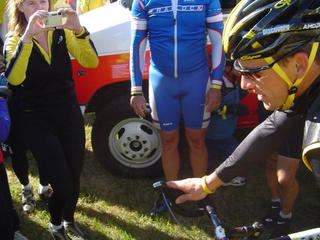 While everyone is nursing thier Interbike hangovers, I thought I'd dredge out something ya'all may have missed. This comes courtesy of Jonathan Maus', from the site he runs called Bike Portland, so thanks to him!

I really can't blame Lance, in all seriousness. I mean, wouldn't you get tired of being pressed in upon by all sorts of humanity, every time you make a public appearance? Sure, it's all part of being who he is, but I'm sure that he gets tired of it, at least once and a while. Then there is the safety factor, as well. There are those who do not appreciate The Lance. You know who you are! The mere fact that Lance has become something extra-human is also factoring into this. I mean, even I call him, The Lance!

Someday, maybe the tables will turn for Lance, and he'll long for those days of attention again. Probably not though. Look at the line at the recent Interbike for an autograph from The Cannibal, for an example. Seems like people never forget a legend!
Posted by Guitar Ted at 8:16 AM