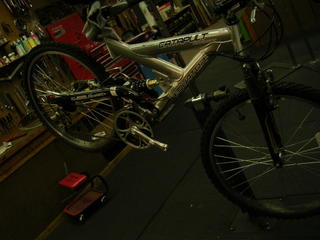 Recently we got this bike in the shop to box up for shipment. Nothing really unusual about that, other than the fact that the customer will spend at least a half to three quarters of the value of the bike on shipping and handling! 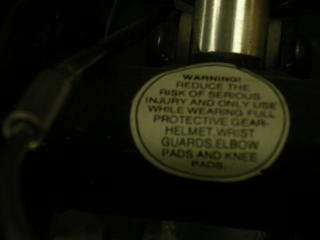 The unusual part of this bike was this warning sticker. "...ONLY USE WHILE WEARING FULL PROTECTIVE GEAR-..........." Why? Maybe because throngs of snobbish bike nazis might tackle you, while you're riding, and belittle you for riding such a stupid machine? ( I hope not!!!) Maybe they are trying to protect you from being accosted by angry motorists in fat SUV's? (Perhaps that should be fat motorists in angry SUV's!) No-..........no, I think I know why!


It's because they know that this so-called bicycle will fold, break, or implode upon itself at any given moment! Best have that rider bundled up against the inevitable. Saves the product liability lawyer fees from piling up! It doesn't help matters any that this rig looks like it could be hucked from a 6 foot flat to flat. The only thing this should be hucked from is your hands.......straight into the garbage can! Well, maybe after a few gentle spins around the block, first. THEN...........straight into the garbage can! HA!
Posted by Guitar Ted at 7:33 AM