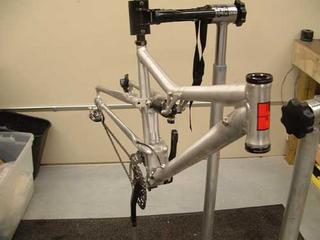 Note: Credit for this pic goes to Timothy Grahl's secret contact within the inner workings of Trek's factory in Waterloo, Wisconsin. Thanks Tim! Okay, what we have here is not failure to communicate! That's because the members of the Fisher/ Subaru off road team provided Fisher with direct input into this new 29 inch wheeled bike. These are the first pics of the prototype for the final production model, due out this Spring. See more pictures here!

O.K.? Here are the salient features of this frame. It's purpose is to be a lightweight, XC race platform. Efficiancy is a top priority. To that end, it is a single pivot design. With this type of design, it is less likely that the frame will lose much to unwanted flex. A platform shock should dial out most of the pedal induced bob that isn't already cancelled out by the basic design itself. Also, a single pivot design is going to be lighter than multiple pivots, easier to maintenance, and be more reliable. Plans are for it to have three inches of "race" type suspension, which means it won't ride like a sofa! In all likelyhood, this will be a Rock Shox front/ rear bike, as Fisher has spec'ed all it's other 29 inchers with these components. I'm also betting on a bunch of SRAM controls, and drivetrain gear, as that is also prevalent in Fisher's other 29"er spec. Top it off with Bontrager bars, stem, seatpost, and Race Lite Disc Wheel System, and this should be one killer off road weapon! (Hint: Introduce the Bontrager Tubeless Wheel System simultaneously for an orgasmic effect amongst the 29"er afficionados!)

I'm very stoked that I was wrong in reporting back in August that this project was dead! Thanks to whomever got the project fast-forwarded to this stage! I will be saving my ducats for one of these, so look for one to hit the Guitar Ted Labratories soon! (Well, as soon as Fisher makes it available!)

This should be a watershed mark as far as the 29'er bike is concerned. A mass produced 29 inch wheeled FS XC race bike that will be( presumably) raced by the pro team. It's a matter of fact, what's raced on Sunday, sells on Monday in the XC bike world. What with the big wheels giving a ride that feels like an inch more travel than you've got, suspension-wise, I do not think having only three inches of travel out back will be a liability. I think this should be a home run for Fisher, but that is all left to the product design team now. They have it in their hands now to either step it up, and deliver, or fall on their face. I'm hoping for the home run!
Posted by Guitar Ted at 8:09 PM