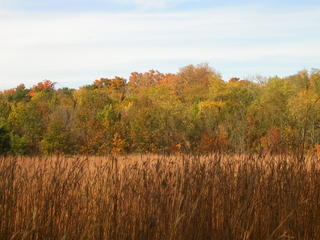 With Recon Plans "A" and "B" shot down in flames, I ended up doing some household chores, and then went for a ride. I love this time of year! I always make a pilgramage to the Greenbelt, along Black Hawk Creek this time of the season. It's where I first "mountain biked". I say that because I used to ride off road on a singlespeed back in the seventies. (That's before Mr. 24 was born!) Anyway, to always remember how good it was the first time I rode my ATB, I make the short trip. 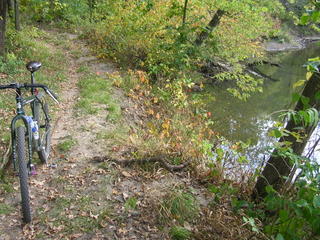 The Greenbelt Trail was originally a bridle path that ran along the Black Hawk Creek. In the years since it's been there, it's been re-directed all over the place by the shifting creek channel, and resulting sand deposits. There are several places where the trail gets pretty close to the edge, like in this picture. 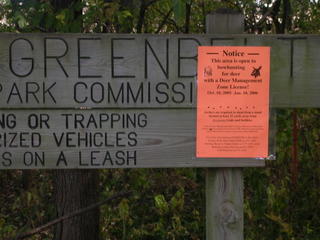 Motivation to stay on the established trails comes in the form of bow hunting season for deer! 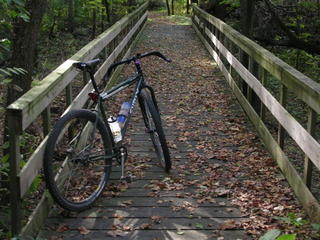 The trails are relatively flat, requiring that you put it in a single gear, and hammer TT style to make it fun. There are several twists and turns, and even a bridge! It was a perfect day to ride the Karate Monkey. Dry and fast! 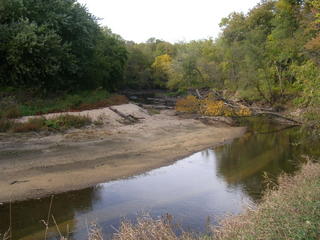 Here is a shot of the creek and it's easy to see how the trail is affected when the water gets high. The channel shifts, the floods knock out huge portions of real estate in one area and deposit tons of fine sand in others. The sand is super fine! Like an hour glass would have. Several "sand traps" exist to jerk your front wheel down to a stop. Fortunately, the 29 inch wheels ride right on through it!

Highlights of today's trip are the following.

1. Under a shelter is the remains of some ones picnic. Pop bottles, plates, and wrappers. It was still all there an hour later when I came back through!

2. Woman riding a hybrid mixte frame bike out in the middle of the woods with no helmet, and wearing casual flats for footwear. She probably though I was the geek!

3. On the way back, I spy a baby stroller up ahead in the middle of the trail. I slow down to sneak a look in it as I pass by. It's empty! Then, about 50 yards off the trail, on the creek shore, I see a whole family goofing around. They seemed to know me, since they called out my name, so I'll find out more someday!

4. Only saw two other bikers. I thought I'd see a lot more people, but apparently the football games were too appealing? Hmmm.......

Well, Trans Iowa recon has been re-scheduled for the second week in November, so this time, it better not get screwed up! The body shop says it's nearly done with the car. Well, they'll wish they had gotten it done sooner, because I've begun calling them every day- and I will continue to do so until I get the car back! Awesome!