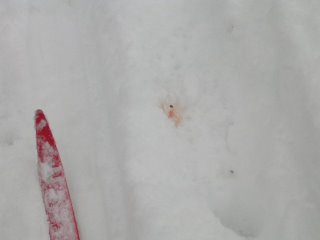 I got out and started skiing on the Robinson Bird Sanctuary, on Ranchero Road, at about 3:30pm. It was raining! The temperatures were rising all day long, and finally it got warm enough to rain. Not much, but enough to knock the snow down from its lofty, fluffy 8 inches or so down to about half of that. It didn't bother me much. The ski tracks were looking good. As I got started, I noticed that some bozo had completely obliterated whatever tracks there were just a little ways in from the parking lot. Hunter! I could tell from the boot tread. Then I saw evidence of what he was after. Blood in the snow! 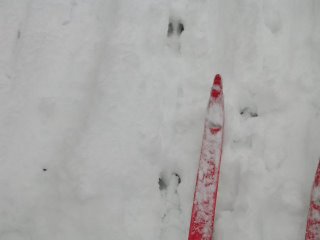 Then there were the tracks of the deer itself. There actually were several different deer tracks in the snow along the XC ski tracks today.


I also saw a hawk, and the tracks of a large dog. Also some raccoon tracks. 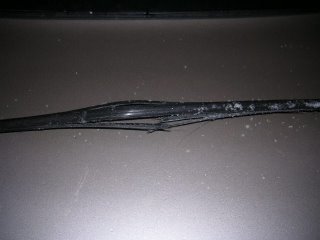 Crossing Prescott Creek, which is dry, I lost my balance and SNAP! There went one of my new poles! Fortunately, I was on my way back, and only had about 100 yards to walk out.


Guess they are not clydesdale rated! 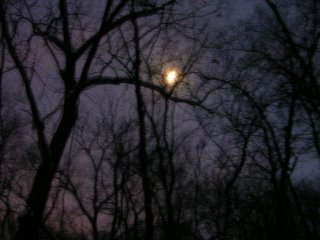 Well, it got dark while I was out there, so I walked out by the light of the moon!

I see Mr. 24 had his own deer story to tell today, too! Ha! At least he didn't break anything! I'm sure he'd have rather rode his bike the rest of the day than to have dealt with all the XC ski rentals today.

I'm pretty beat, so I am going to relax the rest of the weekend. Tonight, I'm going to go out with my wife to Rudy's Tacos and have some cheese-consin style Mexican. Yum yum! It might not be authentic Mexican, but it sure is good. I probably shouldn't mention all these good eats on here, as those guys in training: self denial style will be jealous! Just last night Carlos Buchanondale was jonesin' for some Taco Bell! Whoops! My bad! OUT!