Big Wheel News From Trek U. 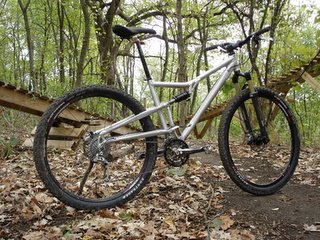 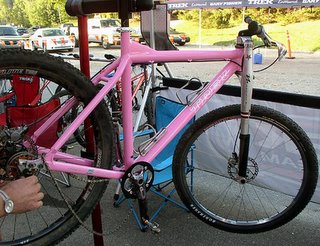 As I mentioned in the last post, I got to meet Ryan Atkinson, the Fisher brand manager, at Trek University, held in Des Moines yesterday. He, along with his other Trek co-workers had these tidbits to pass along concerning up coming 29 inch related bikes and products.

No details on whether or not it will be pink!

2. Fisher has still got plans to introduce the 29 inch wheeled Race Day Super Caliber full suspension bike in June of next year. It is being rigorously tested by members of the Subaru/ Gary Fisher off road race team, and at headquarters in Waterloo, Wisconsin. It has many design features meant to overcome design and performance issues raised by the 292/293 bikes. Things like elevated chainstays to eliminate chain jam, double pass welds to increase strength and maintain light weight, and the ability to run a 2X9 drivetrain setup. (Remember folks, it's a race bike!)

3. Bontrager still has the 29' wheel/ tire in tubeless flavor under developement. The guys at Trek U. said that it is coming out. Judging from the level of testing done by the Bontrager team, I'm sure that they will not release a tubeless 29" tire and wheel until they deem it worthy. Keeping my fingers crossed!

4. I posed the question to them concerning the future possibility of a Trek branded 29"er coming out sometime. Answer? "We're looking into that..... I'm sure you'll see it someday"

All in all, it was very nice to see that Fisher- and now Trek- are not standing still concerning the developement and growth of 29 inch wheeled bikes and components. Very encouraging! And finally, Ryan told me that Nat Ross and Cameron Chambers are both coming back to race on Fisher 29 inch wheeled bikes in '06. Awesome!