It has been a lighter week in terms of time and mileage on the bike for training. Weather and circumstances have played into this somewhat. Even with that, I got in some solid, albeit shorter, rides in, and made a few minor changes to the BMC that I'll share with you this time. 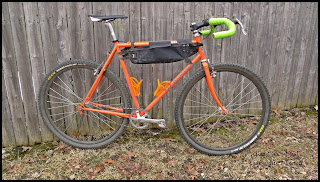 Here we are with the Velocity Bottle Traps, Revelate Tangle Bag, and single speed set up yet. Minor changes include another layer of bar tape and a two tooth lower gear in the back.

My position seems really good on the bike, so I have decided upon a couple of new components in silver to match the rest of the look here. There will be a swap in stems to a Ritchey 4 Axis Classic and a switch to a Ritchey Classic two bolt seat post. I really like the looks of the high-polish silver of these components and the functionality of them is proven to me. (I have used a Ritchey two bolt post before on my Karate Monkey, and the 4 Axis stem is a great design) Besides those things, these components will be slightly lighter as well. 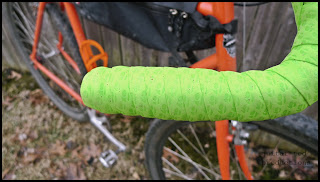 Here is a closer look at my wrap job on the extensions of the Ragley Luxy Bar. I wrapped the first layer in the same green, Bontrager gel tape, and when I did the over-wrap, I concentrated the layers in a place where I will get a fatter diameter of the bar into my palms. You can kind of see that here in the image. It's almost like a cork grip shape, which is an idea I got from looking at late 19th/early 20th Century grips made from wood that folks were using on the ends of their "droopy-bars", which were the precursors of drop bars later. Another cool little detail I discovered by doing this is that the hook, which has a slightly slimmer profile now, is a great place to rest my paws in the rough stuff, because that fatter section behind kind of keeps my hands tucked into the hook of the drop and won't get bounced backward out of there as easily.

Well, it isn't for everybody, but I did some trial and error testing on my fixie-rat-ride-Raleigh with this idea, and I really liked it. So far, it has been good on the BMC too. More riding will ferret out any necessary changes. Matt Chester does something similar, he just uses a different way to get there. Check out his style here. My style is a little more subtle, and you could modify it easily by how much, or by how little, you stack the wraps.

I've tried padding underneath the tape, and it was too much for my tastes and seemed to migrate a bit on me. This over-wrap seems to be working out better for me, and that's the main thing. Everybody should experiment by riding a system and deciding for themselves. I just wanted to point out my way of tackling the issue for a chance that it might help someone else develop their own style.

Here is a look at the entire bar from head on. My brake levers are a smidgen too high, but I erred on the high side to give myself the option of a better place to sit on the hoods when I get really tired. If I were doing this for pure single track, I would lower the levers about 10mm. 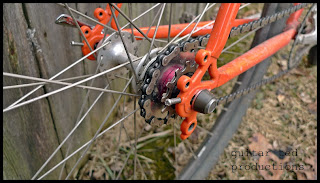 In the drive train department, I decided that (1), I wanted to get the rear tire back a smidge to allow for better clearances, and (2), I wanted to go to a slightly taller gear, since the 40X20 was a bit on the easy side.

To my surprise, the two tooth change in the rear cog was easily accommodated by the BMC's horizontal drop outs. Good, old technology! As you can see, I could slam it back a smidge more if necessary. It wouldn't surprise me if the bike could accommodate a three tooth change in cogs without breaking the chain. By the way, the outer cog in the picture is only there as a lock-ring. (Old seven speed cassette style!)

I am contemplating doing something different with the geared set up. I may do a 1 X 7 with a bar end shifter. I have a line on an old seven speed cassette which I can modify with my own ratios, and I have a seven speed bar end shifter already. Simpler and lighter, with durability in mind. Uses what I have, and I won't have to change anything much about the bike as is. We'll see......

In other training news, I have become pretty enamored of the Clif Shot drink mix and the gel packets. I'll have some more to say, along with my co-writer, Grannygear, on The Cyclist in a review on the Clif Bar products soon. The gel packet design is rad, and the electrolytes in the Clif Shot mix is good stuff. So check that out soon on The Cyclist. (Should be sometime this coming week) I'll still be using elete, because I just can't imagine not using it now after it totally eliminated cramping issues for me. Their additive for water is clean and tasteless.

Been talking about some stretching exercises with folks and I am looking into getting a foam roller for self-massage. Seems like it may help a lot.

Okay, that's it for this edition of The Dirty Kanza 200 Chronicles.
Posted by Guitar Ted at 1:00 AM

There is another roller that has a hard plastic inside and foam on the outside that really works. We have one in the shop to loosen up after standing at the repair stands.
ari

It would appear that you have come to terms with the Luxy bars?

@Wally: I think there is no real functional difference between the Luxy and the Woodchipper. They basically ride so similar as to be only different in minor ways. That said, the Luxy is a smidge wider than the 46cm Woodchipper, which is already a pretty wide bar.

I may consider a 42cm Woodchipper for the DK 200, which would effectively shorten the cockpit a hair and sit me upright just a wee bit more. Possibly good things on such a long ride. I'm still debating that.

I use a foam roller and do stretches for my knees. PT gave me a bunch to do each day. I hate the foam roller, but it works.

I can't say enough good things about my foam roller. It's painful at first, but my legs feel so good afterwards that it's worth it. The trick for me is to ease into the pressure a bit more with each pass.

GT I have never tried the Elite for cramping issues. I have in the past had issues with cramps after the 30 mile mark in the canyons.I may have to get my hands on some of that for a trial run since I have a super sweet 32 mile after work loop that has some nice climbing on dirt !!
CQ

Concerning the Revelate Tangle bag...I have the touring version on my bike. It seems to fit pretty well under the top tube but I find my legs rub against it as I pedal. It's almost like it's too wide. I only put in my bladder when riding. I don't have it stuffed. Have you seen the same problem? Or maybe I should have gotten the smaller version and pull it tighter? My size bag is pretty tight though...Any thoughts would be appreciated.

@Darren: I have the smaller of the two Tangle bags. I haven't had too much of an issue with leg rubbing. I have noticed that once in awhile it happens, but I haven't been bothered by it. I also haven't put my bladder in there yet, but that was the plan for this weekend's ride, so I'll report later.

Hey GT, I'm considering a Surly Steamroller for road/gravel grinder use. The spec for the complete this year looks good because of the bigger tires and off road friendly gearing. What are your thoughts? Bad idea?

@Christofer: I know two guys that tried running Steamrollers as gravel rigs. Both abandoned the idea after long rides spent trying to make it work. The big problem is that the Steamroller geometry and frame measurements do not lend themselves to stability and rider comfort. Two things one should have high on the list of priorities when considering a gravel road riding bicycle.

Pretty noob question, but what is it about the geo on the steamroller that doesnt work? I was thinking of running a 25 degree rise stem with either midges or 42cm woodchippers. The most important thing is getting the drops up high enough, no?

@Christofer: Several things, but it should be pretty simple if you try to see that a Steamroller is based upon a track bike that is meant to be ridden on glass-smooth surfaces, and not over rough rock roads.

Comfort for the rider wasn't foremost in the design parameters. Performance on a high banked wood track was. At least, that is the lineage the Steamroller is coming from, with some concessions.