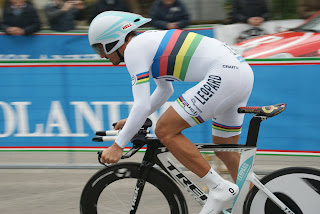 Hey- Maybe he's just that good.... The latest supposed "controversy" surrounding Fabian Cancellara, the current World Time Trial champ, is that he was using some "super-greased ball bearings" in his bikes last season. A report in La Derniere Heure newspaper suggested that a technology called "Gold Race" was used which is claimed to give its user gains of up to 2.5 seconds per kilometer.

Either that or Fabian is just that good at time trials. I mean, last year they were claiming Fabian was using an electric assist in his bottom bracket. What's next? A magic miniature nuclear generator hub? Sheesh! Can't a guy just dominate and be left alone anymore?

Mini-update on the gravel road stage race deal: Okay, I have to say that I am just amazed at the responses I have gotten surrounding this idea for a three day gravel stage race thing. I have been getting comments here on the blog, e-mails, and offers of help and even a preliminary sponsorship idea.

So, this idea will get further attention for sure. I have some people whose advice and thoughts I want to receive and consider before pushing ahead any further, so please be patient with me and know this is being thought about and planned for by some passionate folks. When I have some more solid news, I will be back to share.

Trans Iowa V7: I will have the usual update on the blog for tomorrow, but additionally, I will be posting a separate "Course Conditions Report" this weekend, so stay tuned for the latest gravel roads report on the T.I.V7 course soon..... 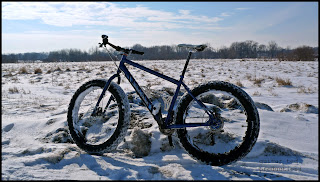 The Snow Dog Update: Well, it had been since mid-February that I had any communication with The Phil Wood & Co. regarding the Mukluk's rear wheel. I sent the wheel back in on February 23rd, and then.......

I decided to shoot them an e-mail Wednesday to see if they even had the wheel or not. Yesterday I received a short e-mail stating that they indeed had my wheel and that they were waiting on free hubs, which they were out of, and the earliest they expected to have those was next week. Then the communique' stated that they would let me know when it was ready.

Have a great weekend folks. It's springtime! Ride yer bikes and have some fun!
Posted by Guitar Ted at 1:00 AM

Oh man, I forgot you even had a snow bike.... At least you will be able to use it soon on the sandy "beach like" trails when the greenbelt dries out. :-). I wonder if Phil has any new hubs laying around that they could steal a freehub off. Strange....

Yeah, I almost forgot too, and judging by the amount of "pro-active" communication" Phil Wood & Co. are pursuing in regards to this, you'd almost think they are hoping that I would forget about it all.

A small company named Shimano makes a pretty fair hub. Mine has run my Pugsley for 2 winters with nary a quibble. At about 1/6th of the price.

Hey, have a great weekend, my brother... Glad it isn't snowing over there.