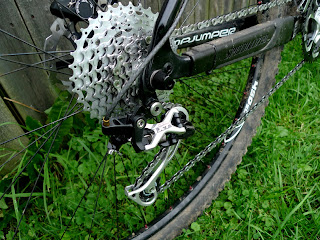 Last year I got to go to a Shimano Special Invitation gig and was told all about the XT DynaSys 10 speed stuff, along with XTR, months before it was released to the public. Then they gave me an XT DynaSys group to play with. All "Secret Agent Man" like. In fact, I had to sign a non-disclosure agreement to even attend the meeting. Like if I said anything early, a special ninja agent would blow a poison dart into my neck, and it'd be curtains for me.

But I didn't press the issue, I'll tell ya that much! Anywho, they did another one of these deals again yesterday up in the Twin Cities at Theo Wirth Park. I'd never been there, so that was cool to find where that place is at.

I'll talk about the stuff I can talk about. The trip up was okay until I got to Owatonna. Man! There are certain places where oddities happen on Earth. You know- para-normal activity, places where gravity doesn't work, Area 51, and Washington D.C. Things where the normal fabric of life is unraveled and up is down, black is white.

Owatonna, Minnesota is such a place in terms of weather and its being bad. once I crested the hill going into town from the south, there was ice all over the sides of the road, it was spritzing rain, and the roadway looked shiny. Great! Just great. Everything was okay though, and once past Faribault, it was clear sailing once more.

I had to go to Theo Wirth, as I said, and having never been there before, I had no idea where to go, since a "certain someone that shall go un-named" didn't forward me the official invite. Regardless, I found it via the wonders of the inner-webs and discovered it was a golf course with a huge clubhouse that was where the event was taking place. And I was only 5 minutes late, annnd....the meeting hadn't started yet. Fashionably late? Well, I didn't plan it that way, but......

Now there were some media embargoes that were spoken of and secret stuff was shared. But.....not everything was secret! There was the much ballyhooed cross specific crank and brakes, and some 11 speed Afine talk. Nothing earth shattering there, but it is cool to see Shimano doing the CX stuff, as it will make more cross bikes available out there in 2012, I'm sure.

Then I had to get home. 4pm. Rush hour in the TC. Good thing I know some side street action! Bonus for riding and driving the Twin Cities as much as I have, and for paying attention while doing so! I avoided the bumper to bumper madness, and got out of there in great shape, only to face sideways rain and horrendous winds all the way home. It was definitely one of the worst drives I have been involved in for years. I narrowly missed getting wrecked by a semi-tractor/trailer that was spewing so much water into the wind behind him that I nearly went blindly under his trailer wheels at 60mph. Not cool! Then there was that gust of wind that got my truck sideways. Sideways! At speed. Crazy stuff, and I was super glad to get home unscathed.


Anyway, what would all the secret stuff be without some drama and adventure, right?

James Bond had trials also Mark - and just like you - he always persevered :)

Now I can't get that Secret Agent Man song out of my mind - thanks!

Is there any more you can tell us about the Alfine 11 talk you mentioned?

@Exhausted Auk: Sure! It comes in silver or Piano Black finishes, and they revised the shifter and cassette (their term) entry point for the cable to a "Low Normal" type system. What this means is that the cable will enter down the seat stay now, and that because of this, they could integrate a release lever into the design, making wheel removal easier for commuters with flats. The new Alfine will also have a new disc brake lever, similar in look to the new XTR levers and will come in both finishes.

Furthermore, they said Alfine 11 weighs less than Alfine 8, and will soon be available as a complete wheel, but no time frame was given for the introduction of that.

Finally, only flat bar shifters are offered now, but Shimano says the Versa shifters are being developed for Alfine 11, as was told to them by the company making those. So, a drop bar shifter will become available, but I do not know when, nor do I have pricing.