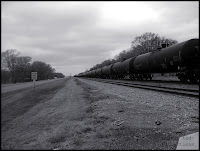 I posted a wee bit on this ride yesterday, but here is more on it. I decided to head north, since that was the direction the 20-25mph wind was coming from. I headed out due north from the house, and ended up having to stop for this train not 15 minutes into the ride. I have been having a few train stoppages this year. Weird!

Waterloo is a train center though, so it isn't any surprise to me. Lots of train activity here and there is a roundhouse turntable still in use here along with a repair station separate from that. Trains are coming and going all night and day. This particular train was all tank cars and had just been assembled before I arrived on the scene. In about ten minutes I was on my way again. 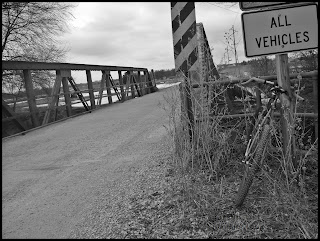 Back at it again on Burton Avenue northward, I was steadily going up, more so than down, and riding right into the teeth of the wind. It wasn't bad, it was just that the windchill was pretty stout with the beginning air temperature at 28F and of course, the windchill was way down there. My feet were getting chilled right out of the gate.

Burton Avenue had great gravel though, so the road was fine, at least, and with every up, I was able to get over the top without getting into a bad place, or even having to stand much at all. The 40 X 20 is working well so far as a gear for these sorts of rides.   Now, I don't have a computer on this bike, so I haven't a clue as to speeds other than to say that if I do 10 miles covered per hour, or better, I am happy. I kept track of the miles mentally, which was good for taking my mind off the wind. After 9.5 miles were gone from the Burton Avenue-Donald Street intersection, I reached the bridge pictured above, just inside Bremer County. If you ever ride up this way, there are a couple of cool old country churches on the two corners previous to this spot. One is from the late 1860's, the other from the 1880's. Pretty rad.

A mile more north, then a bit of zig-zagging over towards Leversee/Hawthorne which takes you back to Cedar Falls. With the wind! I felt like I had a motor on the bike. 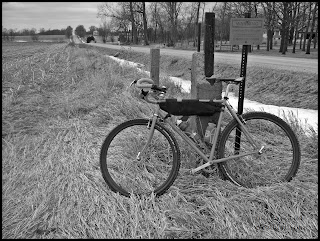 A Word Or Two On The BMC: So far, I have to say that I am pretty impressed with this bike. One of the things I noticed is that it rides as smooth as a good steel bike should ride. I have had two different sets of tires on it, so I know that it isn't just tires. I also have a Campy aero seat post on it, so I know it isn't the seat post, 'cause that seat post don't give! No- It is the frame and fork. It's smoooooth!

Also, I noticed that the frame must be fairly stiff in the bottom bracket area. Of course, I have a square taper crank in the bike, but still- There isn't much more than about 2mm clearance around the Geax tire, and I think I might have rubbed the chain stay twice in all the riding I've done on very hard efforts. Pretty impressive. (Yes- some bikes flex more than 2mm side to side when I have mashed them.)

Finally, I am liking the fit on the bike, which I modeled after my fixed gear, rat-ride, Raleigh Gran Prix. It's definitely more stretched out and lower in front than most any 29"er I have. I seem to be responding well to the positioning. There are not many of these around. About 50 or less. I have #42. You can check out the frames from Black Mountain Cycles here.
Posted by Guitar Ted at 1:00 AM

I sure like that bike. Great choice. Long live cheap steel.

Years ago, guys from Campy commented that the "aero" seat post benefit was increased air flow between your legs to cool the femoral artery. I've never noticed my femoral artery getting hot.


Thanks for the continued kind words about the frame!

Hey! I recognize that bridge. Nice choice on the route, one of my favorites. Glad your liking he bike.