Okay, So I Had This Idea For A Gravel Road Race....Part III 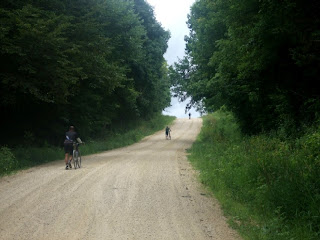 UPDATE: I am still working on things "behind the scenes" in regards to the stage race idea for a gravel grinder. There have been a few developments, and to keep things on the front burner here, I wanted to let everyone know where this thing stands as of now.

You can check into the last update I posted here for those that need to"catch up" to where I am at so far.

All right then, here is the latest "fine tuning". I have decided that this event shouldn't be tied to a state, since it can then get sort of pigeon-holed as an event "belonging" to those who live there and I already have Trans Iowa going on here. I don't think we need another "big" gravel event solely based within these borders. I didn't like the idea of being limited that way. So, I have spoken with a couple of folks that are willing to take this into a multi-state based direction while still retaining the "clover-leaf routes" out of a centralized area to keep logistics easy for those thinking of doing this deal.

Unfortunately, that means that the acronym I came up with- TIGERR- is now not going to be used. As of now, this event is un-named. That's okay. That can be ironed out later. Secondly, it means we're looking at something based out of Southwestern Iowa, Northeastern Kansas, Southeastern Nebraska, and Northwestern Missouri. Whether we get into any, or all of these states has yet to be determined. Might only get three in there, but the idea is to cross some borders right now.

Okay, so the region where we will be working out of has been sketched out. Now, the format will be something along the lines of the following, keeping in mind that it should be easy to get there to do this, and not push folks against the wall, leaving no time to get home for work on Monday. 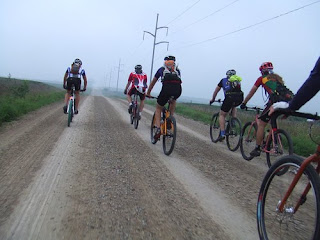 So, I figured that a noon-time start to the thing on Friday would work out best. That day would necessarily be a shorter route. Then Saturday, the big, long, arduous loop would take place. Sunday would start out early and a reasonably short route would be set up to end the weekend. Hopefully leaving time on Sunday to allow for folks to get home.

Total mileage would be determined by the organizers depending upon the difficulty of each days loop. I would guess that 250-300 plus miles could be a target for the three days, but that's a shot in the dark. Don't hold me to that. Right now everything is on the table as far as details go, so look for lots of changes as this gets figured out.

Finally, I want to make a few points very clear.

#1: This won't happen in 2011: I thought about it for awhile, and conferred with a couple of trusted minds on this. I want there to be a reasonable amount of time to "thinker through" this thing. I want input from lots of folks and some special people are already being pulled in to tap their thoughts and ideas on this event. There will be more folks contacted too. This won't be "Guitar Ted's idea". I don't want it to become that.

#2: There Will Be A "Ride" In 2011: At some point there will be a "fact finding" ride, which basically will be a recon of some route ideas and a way to get a handle on how things will actually work out on this deal. I like thinking from a bicycle, and this can be thought of as a "rolling meeting" of sorts. I will announce when this will occur, but it should be roughly about the same time frame as the event will take place, so probably July. All interested parties will be welcomed on this. More on this later.

#3: Guitar Ted Will Not Run This One: I have enough to do, and I don't want this to become "my deal". I think it is a great idea, and I will help, but I do not want to run it all. There already has been some volunteering for the directorship of this event, and eventually, a couple of folks may end up taking this under their wing. I don't know. I just know I won't be running the deal myself, and I want to have a minimal level of involvement eventually.

So, there you go. The next update will be awhile in coming, perhaps in a couple of months, post Trans Iowa.
Posted by Guitar Ted at 1:00 AM

Very interested in following the development of this project so I can hopefully use it to maybe develop a backroad stage ride here in NC.

Cool! Sounds like a lot of fun. Hope I can make it if it happens. The "ride" at least, not the race.

@Tom: Well, perhaps making all the steps public info here would help things along with you and others. I'll post up things as they develope.

@Captain Bob: Likely I will do the GTDRI as the "exploratory ride" I'll let ya know.