Fatter Tires For The BMC #42 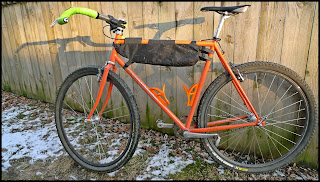 As mentioned previously here, I managed to squeeze in some "real" 29"er tires within the confines of the Black Mountain Cycles Monster Cross frame and fork.

The tires in question are the Geax Barro Race 29"er TNT versions, (thus the gray sidewalls), and they are mounted to some pretty skinny Matrix rims. It is important to remember that wider rims will spread out the tires a bit, so the Matrix rims width is probably the max width I can use. Wider rims and the Barro Race tires with this frame and fork probably wouldn't fit. Not that I'd want much wider tires anyway. More on that in a minute.

The rear clearance is actually pretty decent, especially if I added a half link, or used one tooth smaller cog. As you can see here, the tires' "whiskers" are just brushing the chain stays. There is plenty of room above at the seat stays/brake bridge area. I wouldn't run this combination in mud, if I valued the paint job though!

Here you can see that the front fork is pretty much the same deal as the chain stay clearance. The Geax Barro Race 29"er tires measure about a 1.8-1.9 on a 24mm wide rim, and the Matrix rims are certainly skinnier than that. I do want to upgrade at some point to Velocity A-23's which are 23mm wide, and would get the Barro Race tires too close for comfort here, I am afraid. That's okay, as I wasn't tied to running these tires for the Dirty Kanza 200, but I might if I were to use a different rims that were narrower. We'll see. I will be putting in some more ride time with this combination before I decide on that.

The increased volume sure is smooth and feels great from the saddle though. I can run these at 30psi easily, but I have been sticking to 35psi for the time being. The Barro Race has a stiffer side wall than most tires, so I think that lends to the ability to run a lower pressure, even with such a narrow rim. That said, I think the Barro Race tires may be a bit much for Dirty Kanza, the tread is really for dirt after all. Definitely, the Barro Race tires are big enough. Heck, the Vulpine and Nanoraptors aren't much bigger, and that's what I've been running at this event in the past. The idea is to go faster, and not lose much of the comfort. In that view, I will also be considering some other tire choices, but this Barro Race? It isn't out of the running by any stretch.

I'll update with more on this bike and the set up later. But for now, this is going to be a fun, smooth rolling gravel road bike. Now I just need to get some gears on it for Dirty Kanza!
Posted by Guitar Ted at 1:00 AM

These are pretty popular at DK: http://www.specialized.com/zz/en/bc/SBCEqProduct.jsp?spid=42177&menuItemId=0&eid=0

@Paul: Those are pretty sweet. Nice and light. Look like they'd make a great race day tire. I may look into those. Thanks for the link!