The Load Out: NAHBS Afterthoughts 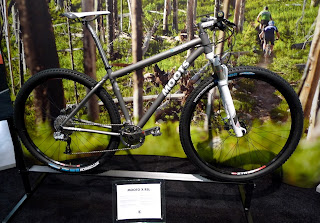 "The Load Out" by Jackson Browne

Well, by now all the bikes have been packed up and shipped back home. The big "handmade" bike show is all done for another year. Of course, you won't have to wait long for another one of these shows. They seem to have sprung up in every corner of the nation now. Still, "NAHBS" is the one everyone geeks out on, and next year the whole circus sets up shop in Sacramento, California.  Get yer "art-bike" on in Cali!

I should say that not all of the "handmade" bikes are custom art on two wheels. Some of them are really purposeful, like the Moots shown here. However, these are not the bikes that garner all the attention. Not usually, anyway.

But that's another post. This one addresses something I found to be odd after the fact. A prominent cycling photographer/writer had the following to say on Twitter about the recently closed "NAHBS" and what he felt were it's main themes:

Now earlier the same journalist was saying that "NAHBS" was an indicator of what mainstream cycling companies would be pushing in a few years.

I don't mean to pick on this particular journo, but I do believe a large portion of "NAHBS" fans actually believe this sentiment. Nothing could be further from the truth. 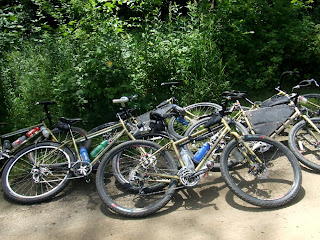 First of all, let's take up the case of the "monster cross"/adventure bikes w huge 700c tires, discs, drops"

Let's clear up one thing right away- "Monster-cross" bikes are not drop bar 29"ers. Secondly, see that pile-o-bikes in the photo? Yeah- production drop bar 29"ers right there. Been around a few years too, by the way. Did I mention that these are specifically marketed as "adventure bikes"?

Yup. That's right folks. A production bike company that has bikes built in Asia by human hands, (gasp!), did this before it was a "trending topic" from the most recent "NAHBS". (But to be totally fair, said company also has titanium versions made by human hands in Tennessee, of all places. Can you believe it?)

And if you really want to know about "adventure bikes", I believe there was a guy hangin' around at these "NAHBS" deals that could have told ya all about where that idea came from. Nothing new there, really.

Then we have the case of the "road bikes w long-reach brakes for fat tires&fenders" to discuss. Now really......can you honestly say this is a "trend"? "NAHBS" was practically founded upon such custom bikes. 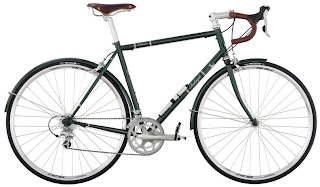 And yes, there are production bikes that have been built by hand overseas that fit this description for years. Rivendell, anyone? Or how about this Raleigh Clubman, replete with fenders and long reach brakes.

So, is the tail wagging the dog here, or what?

I don't know about "trends" from the 2011 "NAHBS" that will be picked up by the bigger companies, but if the lack of pictures of urban fixies from the show means anything, there will be at least one thing we can all be glad about.

Finally, let me emphatically say again that this show, custom, high art bikes, and people that dig that are all okay by me. Heck, I own two such "handmade bikes" myself.  I just think that the "importance" of all of that is a bit overdone. It is what it is, and nothing more than that. Trouble is, a lot of folks have attached "meaning" to custom, one off bikes that is, at best, misplaced sentiment. They are bikes. Ride them. Have fun. That is all.

Meanwhile the hall is empty and the show has moved on to another town......
Posted by Guitar Ted at 1:00 AM

I've only really paid close attention to the NAHBS for the last 3yrs or so. So my comments need to be taken with that in mind.

To me, the frame builders at the show seem to embrace whatever is more mainstream at the time. They seem to take the current trends and run with them, doing their creative thing on top of what the industry and much of the public already accept. I haven't seen anything pointing to the next big thing as much as I have seen how cool you can make the current thing. And then there are some one off things that are fun, but will never be more than just exercises in color wheel dynamics and what to do with a torch on a rainy day. Its all good, I like to see this stuff. A fashion show for bikes really.

As an exhibitor (for a component company) at NAHBS, what the show gives me is a chance to market directly to my most likely new consumers, to expose my company's product to framebuilders who might not otherwise know of it, get media coverage that's completely out of porportion to the actual size of the event, and most importantly, do it for a fraction of the cost, stress, and distraction of Interbike.

NAHBS, as it's gruff, unloveable founder repeatedly stated, is a show for frame-builders, first and foremost. It's also a show for the companies who supply them, preferably those who make their products in the US or the EU, except for the giant Asian elephant in the room, Shimano. Mr. Walker never said anything about the show being trend-setting.

For us, the show was a huge success, and we'll happily be back next year.

@GOB: With all due respect, I didn't say that Don walker said anything of the sort that I wrote about, nor have I even referenced him in my posts.

I also didn't say the show was "bad", (in fact I say the opposite), but what I am commenting on is some of the attendees, (and those looking in on the web), perceptions of NAHBS, which I think is skewed. Also, that some in the industry, and some of the fans of the show think that the custom frame builders are "setting trends"

I am happy to hear that your business is seeing success from showing at "NAHBS" and that you seem to be getting the attention of those whose attention you desire. Good on you!

That has nothing to do with my post, and again- It isn't like I want the show to go away.

Adventure Bikes are far from new, especially as a concept, and I have been using the term since at least mid 2004 and can document it to late '04. Had similar bikes and doing the rides for more than 20 years.

My "Adventure Bike" can also be my 29er mtb (one is), though the "mainstream" geometry trends have moved away from my preferences.

"Adventure Bikes" as a concept were what all the constructeurs were doing for randonneurs decades ago. Fat tires, bomber wheels, fenders, racks, drop bars...you get my point.

Nothing old is new again, or some'at