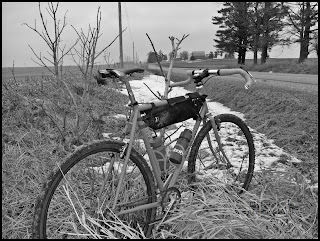 Several things have happened recently that have made me think.........a lot. Odd things and ordinary things together have inspired me to take stock of just "what-it-is" that makes me do what I do.

First and foremost, it has to be said that I like people and getting to know them. Well, it would be silly for any of us to be living like a monk and be reading this, really. I mean, I am sure that would be a violation of some sort of monastic tenet. So, you are probably like me that way, or you wouldn't be reading this. "Mr. Obvious" stuff right there, I know. But that said, it is a motivation for what I do here and elsewhere on the inner-webz.

Oh sure.....there are some bad apples. But for the most part, it's been a huge plus to have gotten to know so many folks through what I do. Nuff said!

Secondly, it is "the bike" thing. And really, that's it. Riding a bicycle, and riding, and riding, till I'm stupid and the "monkey-butt" is so bad I can't sit on the saddle for a few days. Wash, rinse, repeat. I don't really care about which bike it is, or what kind, if it is a new bike or an old one, a test bike, or just a one off custom bike. Does it have two wheels? Does it fit me reasonably well? I'm good.

Really. That is all there is to it. 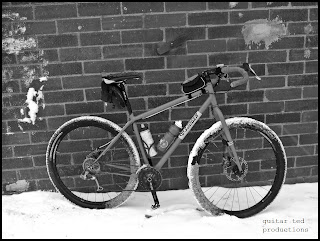 Now, I do like to write stuff, (again, cue the "Mr. Obvious" theme), and once in awhile, I seem to upset the apple cart, which gets me in hot water with some folks, seemingly, or mentioned on some big time cycling blog. Maybe I write things sometimes that folks actually like, (which apparently they do, by the reactions I get), but whatever it is, I don't let myself be motivated that way. If it inspires you to think about bicycles, or even better, to go out and ride one, instead of reading this non-sense, then all the better.

See, the thing is, I'd still write this stuff no matter if the audience was one, or whatever it is out there. I just am excited about bicycles and people that are into bicycles. So, if you think I am power mad, looney, looking for another test rig, or for anything other than the enjoyment of riding and writing about this bicycling stuff, then you just don't get it. I don't give a rip about any of the fluff beyond what I mentioned up top in this post.

And that is all.

I got a message last night from a fellow I admire who turned tables on me and told me that what I had done inspired him to "take a different direction" with regards to his cycling. Now he is tackling some stuff that is just mind-boggling. He said I was to blame for some of that. Hard to believe someone like that would credit this curmudgeonly crusty mechanic in Iowa for anything, much less that, but it is a prime example of what it really is all about. Riding bicycles, and inspiring each other to go over the next hill.