So, About That 10 Speed Mountain Bike Stuff...

Several long time readers will recall how I have in the past bemoaned the onset of the 10 speed cassette for mountain biking. Well, regardless of whether or not you and I want it or not, it is here. I have ridden it a fair amount now, and I suppose it is time to give an assessment of this "advancement" in technology. Especially so now that we see Shimano has pretty much dedicated all of its serious, dirt capable groups to 10 speed with the announcement of 10 speed Deore the other day. This matches up with SRAM as well, who have 10 speed all the way down to the X-7 level. 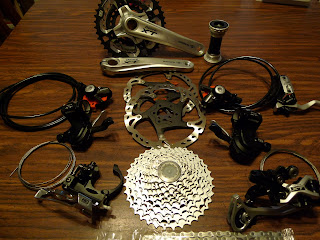 That is the world as we know it now, and for off roaders, it is now a 10 speed world. If you were waiting on that high end, Shimano or SRAM made 11-36T cassette, well, that ship has sailed, my friend. Not gonna happen. 9 speed off road stuff will be supported in the aftermarket, for awhile, but don't expect any innovations. Do expect less choices until that fateful day when "poof"! It's no longer available. Just ask six and seven speed stuff.

Now, moving forward, we have this to deal with and as most things go, it isn't all that bad. However; there are some things that I see as glaring mistakes. In no particular order, here is what I have noted...


On The Plus Side: With regards to wear, I haven't experienced the big fail I was expecting to experience. 10 speed mountain bike components seem to be holding their own, due to materials technology and efficiency enhancements. 2X10 stresses the drive train less, due to a more optimal chain line, and by pretty much eliminating all the issues with shifting across the entire cassette in either front ring. On the triple set up, the addition of the 36T ring in the rear has enabled me to stay out of the granny ring more often than not. This also helps with wear issues.

Other than some ergonomic complaints, I really have been impressed by the DynaSys group's wear and the performance is at least as good as 9spd, but not improved upon it. In the case of SRAM, the XX group is nothing short of amazing in terms of front shifting especially. The rest of the performance there is also at a crisper, more refined level than X-0, as it should be.

In the end, it isn't as bad as I thought it would be, but it isn't as necessary as they, (the component giants) would have you think. We could have made a better 9spd, and lived going forward with no real issues. However; I don't think 10 speed is the end of the line either. In a prophetic statement, or early leak, (you choose which), KMC, a chain manufacturer who happens to make most of Shimano's chains, handed out literature recently on their "X11SL" chains. It states that it is a chain compatible with "Shimano, Campagnolo, and SRAM 11 speed drive train system".

I'm hearing that SRAM will be offering 3x10 soon. They are sticking with 2x10 but have acknowledged that there is support out there for 3x10 systems. I have no idea at what level - X.7, X.9 or XX.

@Wally: According to my research, SRAM is going to offer, (or already is offering), 3 X 10 in everything from X-7 to X-0, just not in its premier XX yet. Maybe what you heard was in reference to XX?

I tell ya, I really love parts of my 2x10 on the Salsa Spearfish. However, the 26t granny is way too small for me. Just riding along if I dump from the big ring to granny, I have to downshift a bunch of times to "catch up" with the gearing. I personally would like to have a 30t. Really, I think a 1x11 would suit me quite well. Have a bash guard with a 38t big ring.

I'm one of those guys that swears by grip shift, so I'm a little bummed by the news. Guess I'll have to check out those small garage guys or stock up on 9 speed components.

I guess I'm going to be the one standing up for 22 x 36 low gears. My bike is a Specialized Carbon Experr 29 with a 2 x 9 setup. I use low gear a lot; with big wheel traction you can climb long and steep technical hills feet-up. Once in a while I would like one notch lower!
Dumbest thing ever with this combo is the alloy freehub body Specialized spec'ed.

My relatively new Trek/Gary Fisher X-Caliber shipped in late 2010 with SRAM X.7 in 3x10. The cassette is 24-36 and my clydesdale self has not broken the 10sp chain, even though I tend to stay in the middle ring most of the time, and mash up hills. I really think a 1x10 would suit me 95% of the time on my local trails here in GA.

I'm hoarding 7 and 8 speed stuff, myself. For the non-racer, I don't see enough advantage to even 9-speed, much less 10-speed, mountain bike equipment to justify the huge price tag.

Yes, for most people, the price tag is not only outrageous, but pretty much unaffordable. And, it's just another example of the major players in the industry blindly following race development at the expense of the average rider.

In my opinion, anyway. YMMV.

The gripshift thing is ridiculous. The "small garage guys" solving this problem aren't exactly doing it for cheap either...

I'm 9 speed for another year on my Mamasita and just switched from 10 "down" to da 7700 on my cyclocross/gravel race bike. Nice to have interchangeability. Plus the cost of a couple of 11-32 XTR cassettes these days is pretty appealing vs. any of the 10 speed options that come in with similar quality.