I have a few things to comment on today that are not really full post, feature length rants, so I am giving you three short ones today...... 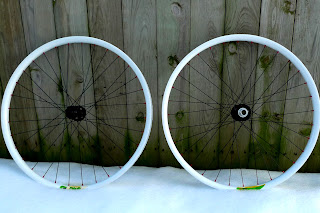 29"er Weight-Weenies: When I was up at Frostbike interviewing Jeff Frane of All City, I made a comment about how 29"er freaks were too weight conscious. That the way some of the aficionados of 29 inch wheels talked, the road wheels some roadies lust after would be considered "too heavy" for use on their mountain bikes. I said that this apparent neglect of reality was "stupid" on the part of these 29"er folks.

This woke up Hurl Everstone's ears, and he was obviously quite surprised to hear someone like me say this. He even asked if he could quote me on it, as if someday he'd need to call me on that. Well, I said "go ahead", because it really is pretty stupid when you face facts.

Check out this link to a set of lust-worthy Zipp 404's. Yeah, all carbon-fibery-slickery-fast, and you would think- pretty light, right? Well, try 1658 grams on for size. Oh.....and we haven't added quick releases to that weight. Want a Power Tap? Make that 1893gms then. Okay, let's say that any company you want to name came out with a XC racing wheel set for 29"ers that weighed 1660 grams. What do you think they would say about those? And keep in mind, the cost of a grand plus some change for the set. Well, I'll tell you that the "masses of 29"er freaks would be crying foul till the cows came home.

Something is just wonky about that.

And I haven't even gotten into rider weight limits, how the wheels may not be "every day trail wheels", and tubelessness. And it isn't just wheels either. This goes for tires, forks, and frames as well. Sometimes I think the term "reality check" should be part of the lexicon of 29"er riders out there. Just sayin'.......

What It Is, And What It Ain't: It seems that a couple of the editors at Bike Radar are trying to convince the unsuspecting public that 29" wheeled drop bar mountain bikes are really "monster-cross" bikes.They got their wires all crossed up over there! 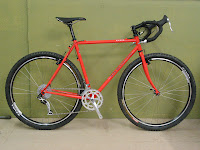 By their definition, anything with wide, high volume tires and drop bars is a "monster-cross" bike. Well, if you read the article and the ensuing commentary, you'd think that all monster-cross bikes had 29"er wheels. Well, they don't, and I'm not sure that what they are talking about over there isn't really just a "mountain bike" with drop bars. That's what it would have been called 25 years ago, just a drop barred mountain bike, ya know? 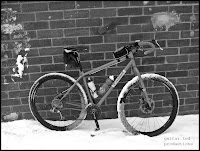 <===This one? Drop Barred Mountain Bike.....see the difference?

We went over this a couple years ago now on Twenty Nine Inches in a piece I wrote about monster-cross bikes where a fellow that is pretty steeped in drop bar mountain bike history, and an industry veteran, made this very wise statement:

“When I think monstercross, I think of a bike with clearance for 700×45C tires, drop bars, and cyclocross geometry. Change one of the first two items and it becomes something else. Change the tires to 2.1 and it’s just a mountain bike with drop bars. Change the bars to flat and it’s a hybrid"

That makes a whole lot of sense to my mind, and keeps the "monster-cross" tag in a place where it makes the most sense. That being the middle ground between true, straight-up cyclo-cross rigs, and 29"ers. Or, as Wes Williams would say, "28"ers". Not this non-sense Bike Radar is trying to fill our minds with, that's for sure.  Let's quit trying to "re-invent" the wheel, as it were, okay guys?

The Snow Dog Update:  I know some of you out there are wondering why I haven't been posting about rides on my Salsa Cycles Mukluk. Well, as some of you might remember, I had a Phil Wood rear hub on that bike that failed....twice, in less than a month. It was serviced by Phil Wood the first time it went back, and 12 days ago I sent it back in again.

Well, needless to say, I am extremely disappointed in that fact, and as of this point, I have no idea when or how this situation will be resolved. There are some things I would like to describe about this story for you all, but to be fair, I am going to wait this out until it gets resolved and then the whole story can be told.

So, for now, the whole bike is basically useless until I can move off this impasse I am sitting in the middle of at the moment. More when I have something I can share......

Why do we read BikeRadar? I've read the same article about "Monster-Cross" but I've many others that are very similar showing a lack of true awareness and I wonder, "why am I reading this?"

It reminds me of idiots that call sportbikes "crotch rockets".

It's good to see that you are putting their feet to the fire. It's maddening that it's normal in some instances in the bike industry to be so slow, make you pay for return shipping on defective stuff. As soon as they got word it was bad, they should have had a replacement in the mail. Nothing is worse word of mouth regarding bikes than someone with an unrideable bike for an extended period. It has nothing to do with being a small or large company.
Last summer, I experienced some cracked frames (that turned out to happen to someone else and were faulty) and tried to get new ones as replacements. The answer I received? "It's a huge outlay for a small company to fully replace it." The result? I was without a bike. Now, still waiting for a replacement. That is absolutely pitiful. I don't expect that they can continue doing business like that too long.

I agree with you on all three points... As much as I've traditionally loved Phil Wood, it's been upsetting and disappointing to see your experience, and gives me pause as I consider future purchases to say the very least. And you know as well as I do, I purchase a lot of high-end bike parts... Heck, I was one of the guys telling you to give them the benefit of the doubt, and now the whole experience has even swung me the other way. Quite sad...

And now that it is evident that a "29inch" tire fits in my frame, I wonder at the statement I made regarding changing the tires to 2.1. Regardless, the frame's geometry is still firmly founded in cross and not mountain. The fatter tires are a happy accident.

The more people argue about labels, the less interested in that label I become. The best thing about bikes is really how versatile they are. Well, except for a high-zoot carbon road rig.

The only category label that really matters is "bicycle."

Wheels: Shows the importance -- or perceived need -- of aerodynamics on the road. A better comparison may be road climbing wheels vs mtb race wheels.

And the WW 29er owner is always going to look at the lightest 26" race wheels and complain that the 29" wheels are heavy.

@jonathansmith68: Actually, the adapter is only for enabling those with offset rim/135mm OLD snow bike wheels, (aka "Pugsley wheels),with the ability to use a Mukluk frame, which is a symmetrical rear configuration. The way you do 29"er wheels in a Mukluk is to get another 170mm OLD rear hub, and build up a wheel on a 29"er rim, or use as offset a wheel build as you can on a 135mm OLD hub, (probably on a Bontrager rim that is offset drilled), and the using the adapter.

Either way, you have to spend a bunch of money and time to invest into that, you just can't put a standard 135mm 29"er wheel in there. (Because if you did, with the adapter, the wheel would be off center to the frame by 17.5mm)

Ahhhh, I see. That makes sense, as you would probably run into some pretty exterme chain-line issues with a regular 135mm hub centered and non-offset.

yep- my 29" zipp 404s on dt240s are heavy... I say 29" because they are 6-bolt disc hubs. To me that is what would make something a "mountain bike" these days vs. a cross bike. Forget this monstercross thing somewhere in the middle, I haven't a clue what that's supposed to mean. I for one like riding a pure cx bike the same places someone else would prefer a drop bar 29er with 45s. Labels based on preference don't make as much sense to me as labels based on use (ie- road bike).

seriously, the weight weenies road stuff is like 950 grams. Oh yea, plus the weight of the skewers!

I'm following the phil wood thing as well... keep us informed. My dad has a 60s legnano with some of the very earliest phil hubs ever handmade. I lusted after them even before I started riding a lot/racing. Sad to hear how this is going.