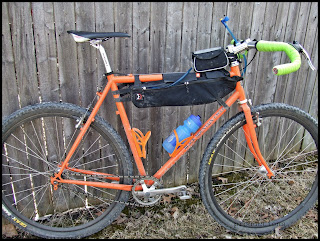 Whether The Weather Will Allow It, Or Not: Guess what folks? It is less than a month till Trans Iowa V7. That means that David and I need to start cranking down the screws on the finishing touches for the event.

Tomorrow it is supposed to do "something" in terms of the weather. Snow? Possibly. Cold? Yes- certainly. I wanted to ride a section of the T.I.V7 course tomorrow, but I may end up having to drive it, or perhaps, stay home!

The thing is, the dang weatherman doesn't know exactly where the storm will track, so it is a crap-shoot right now as to what is to be done about Saturday. I only know one thing: I am stoked that we got the recon done at the end of October last year! (Look for a Trans Iowa Update tomorrow and a course update, if I can get it, later)

Is It The Gas, Or What? Something sort of odd is happening around here. I can't speak for anywhere else, but around these parts, I am seeing more folks out on bicycles already. Even though it has been cold, and not that great out. This has been corroborated by folks coming into the shop and telling us that they are noticing more commuters as well.

Added to this, I am seeing more bicycles going out the door than I can recall in the past several years. Even more than last year, and last year was really good. Whatever is motivating folks: gas prices, or? I don't know, but it seems things have changed a bit. That's a good thing, I think.

I Didn't Plan This.....Really! All along late last year I was telling myself that I wasn't going to sign up, or commit to a bunch of events and then have those things drive me bonkers trying to prepare for them, and what not. Well, I already did CIRREM late in February, and now I have this event coming up next Saturday.

Something about gravel events and "gentleman", that I don't quite get. It is as if we ride in tweed outfits and smoke pipeweed in carved wooden smoking devices. (Well......actually some folks I know smoke that stuff.....you know.....uhhh.....yeah!) Anyway, I'll let you know if I see anything untoward going on at this deal.

Right now all I know is that it is a team event, and it will be self-supported, free, and 75 miles long. Hopefully it won't be cold and snowing, but you know what? I bet the weather will definitely suck. I just have a bad feeling about that. (Hope I didn't jinx things!)

I think I'll ride the Badger again. I won't have the gears on the BMC yet, and well, I don't want to be the slow guy holding up things with regards to the "team". We'll see, but I think that's going to be "the plan". (Better get those squeaky brakes un-squeaked!)

Hope you all have a great weekend! Ride yer bikes, and at least thing "spring-like" thoughts!
Posted by Guitar Ted at 1:00 AM

Mark between your blog and Ari's and all these awesome gravel rides - I think I am relocating to the great midwest.

Everyone thinks I am crazy around my neck of the woods.

Have a great weekend and hope recon goes well!

Where I come from, a "gentlemen's" ride referred to one where everyone rode a fixed wheel. I have only managed to go on a few of those, and one of them was just me and my wife!

I thought "gentlemen" where racing was concerned meant that the riders had to be over 40. Not a problem for me any more.....

So perhaps you should take this to its logical conclusion, and ride the Renegade Gents Race in a team of over 40's, all riding fixies! Sorry I don't have any tweed I can lend you, but I know a man in England who does.

Most of the gravel events I've raced have been attended by people that act like Gentlemen (and Gentlewomen). I'm not looking at this as a race, I'm looking at it as a group training ride. I'll have to reassemble my King hub this weekend so I have the right bike for the festivities.

Yeah, I'm not a big fan of the weather developments for this weekend... I'll tell ya' that much. Hopefully this will be a "Boulder-style" storm and it'll be outta' here as quickly as it comes.

I wish I was gonna' be able to make it over for the gents race next weekend, but it's supposed to be the opening weekend of our mountain bike season here in Nebraska, so at present, I'm planning to stay here and race at home. Of course, with the weather forecast we're looking at, those plans are subject to change, but that's the plan today. I hope you have an awesome time though, and I'll see ya' in late-April, when we're all together for "The Big One".

The whole concept of a "gentleman's" race is that a team start together, get to various checkpoints together, and finish together, rather than go off solo and macho. Sounds like this one will be a good time.

GT could you quit putting the pics of the BMC up!!! I'm totally in love with that set up. It has got to be sweet on the gravel.I assume it would be totally different than riding the Monocog.