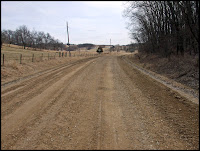 Note: All images can be clicked and enlarged for a closer inspection.

Trans Iowa Course Update #2: The words from this venture are "fresh grading", "fresh gravel", and "chunky". Oh yeah! let's not forget our old friends "frost heave", and "powder", along with "sandy".  Mud too.

All of those things I found on my ride/drive on Saturday along the Trans Iowa V7 course.Let me explain... 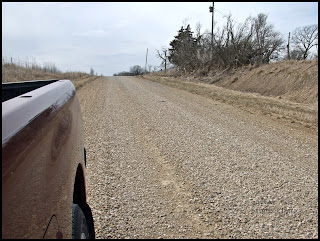 Fresh Gravel: There was a lot of maintenance already finished in the county I was traveling in Saturday. Almost every road I looked at had been graded and had fresh gravel put down in many places. Not all, but enough to make skinnier tired rigs bounce all over the place in many spots. My image here should give you a good idea of what I mean by that.

The basic conditions of most roads, besides the fresh work having been done, was excellent. Mostly dry roads were encountered. This is a good point to note, since we received rains over the course last Tuesday. (It wasn't much, but it did rain over the entire course.) This bodes well because the ground isn't totally saturated and drainage seems to be ongoing right now. I only found a few spots where "weeping" from frost was still going on and the roads were "peanut butter" consistency then, but this was only very minor. 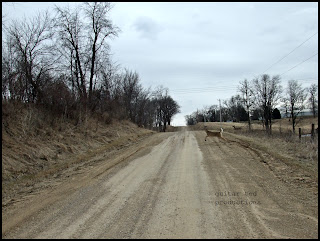 There were a few roads that hadn't been maintained from the winter yet that are on the course. The image here shows one of those. Notice the "wood rats" that are bounding across the road in front of me? I was on my bicycle and had to stop for them. This is the tail end of the herd, as it took a second to grab the camera and fire it up.

I point this out to show that yes: You could be taken out by a deer or two......or more, on Trans Iowa's course. These critters are unpredictable, so be aware of that and be careful! (By the way, it isn't a twilight/night time thing. These deer were out mid-afternoon!) At any rate, it isn't something you might consider normal for your area, but here, it is all too common. Dogs were out as well, but none I encountered were anything but friendly and mainly were content to run out and bark at me as I rode by. 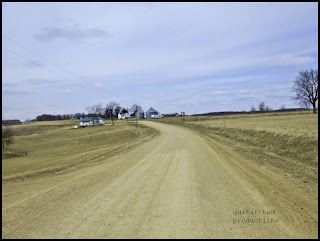 Mud was on the B Roads, but that was expected. It'll take more wind and heat to dry up those roads. It will probably happen, as I see the temperatures are forecast to reach the 50's and 60's soon. Barring rain over several days previous to the event, the B Roads should be good to go.

I did find one that David and I may re-route around though. It has been too badly damaged from the winter and recent rains that I am afraid it would become a hazard we can not afford to risk. We'll make a final determination soon, and it shouldn't affect mileage one way or the other. It would mean adding maybe a few tenths at most.

High Traffic: Of course, the activity levels on these roads is set to increase dramatically very soon. Farmers will be hitting the fields soon to start the planting process, and grain will be transported by semi-tractor trailer rigs as well. This will pulverize the higher traffic gravel to a fine dust. Last year we encountered some areas that were a foot deep in fluff. This will be a concern for the skinnier tired set, and an annoyance for those with fatter tires, should it occur that we have dry weather. I hit some of this Saturday and it definitely upped the effort to push through it.

I'll be checking more parts of the course later, so stay tuned for further updates as I get the chance to do the recon.
Posted by Guitar Ted at 9:55 AM

@Hal: Well, Iowa is for certain going to be going "backwards", as it were. We probably have more roads per capita than most states do.

I understand people don't like the dust, dirt, and inconveniences, but the road problem is symptomatic of a much larger infrastructure problem facing all of us all across the nation. We need work done, but it is too expensive to get it done.

Something will have to give, and it ain't gonna be pretty!

Help Ted, Sorry This question has nothing to due with trans Iowa. I'm building up my Black Mtn Cycles road frame. The plan was to go alittle old school. So I ordered up some Dura Ace 10sp downtube shifters. I also wanted go anywhere gearing so the plan was to run a new XTR 10sp derailleur with a XT 10sp cassette. Ted for the life of me I cant get the thing to shift. Do you know if the new Dyna-Sys system pulls more, or less cable than the 10sp road stuff?

I just want it to stop freezing! I am officially done with the winter.
Ari

@kerry thurgood: Yes, DynaSys is closer to SRAM's ratios now than the 2-1 ratio of Shimano road shifters. The whole geometry of DynaSys derailleurs means that they are only good for mtb Shimano 10spd stuff. No interchangeability there.

SRAM, on the other hand, can be mixed and matched within the 10 spd groups. Mtb or road are equally good to be mixed in SRAM's 10 speed scheme.