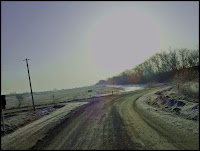 Saturday I met up with Captain Bob, Karmen, and a chilly 25 degree blast of air west of Denver for a nice little gravel loop. This was the first ride with the BMC "Orange Crush" set up with the 18T rear cog versus the old 20T one. Would I be able to even keep up? I had no clue, but I was out riding with like-minded folks on a clear blue sky morning. What could be better?

The route was kind of up in the air, but I had something in mind to get us started out with. So we took off without standing around, since it was not conducive to staying warm. 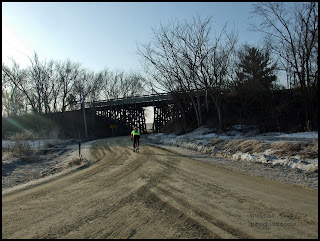 It was pretty chilly, but the wind was low, and the frost was everywhere, sparkling in the bright morning sun. It was as if the entire Iowa landscape was bejeweled and gilded in silvery stuff. Even the road showed signs of crystals that had formed from the moisture welling up out of the ground due to the warmer weather of late. The frost also was keeping the road solid, instead of mushy, which it would have been had it been warmer.

As we started out, we were obliged to hit some of the bigger rollers around the Boy Scout Camp. I was fearing being dropped out of the gate, and Captain Bob spun away, as I expected, but he didn't get away too far. The big gear was pushing my limits, but then again, I just hopped out of the truck and onto the bike. One of these days, "warm up" and "stretching" will become more than words for me! 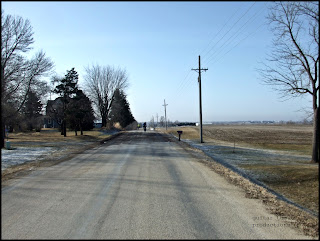 Then after we cleared the Camp Captain Bob wasn't feeling it too much and before I knew it, he had slid back to Karmen and I was cruising up the road by myself until we got just north of Denver.

I stopped at Highway 63 to wait up for the other two, and I had just passed a car pulled over to the north side of the road where a man was standing just outside his car retching and coughing violently. While I didn't spy any substances being projected, I felt that soon there would be, or at least some vital organs were rebelling and on their way out this guys mouth.

I was wondering if I shouldn't reach for my cell phone when up rolled Captain Bob and Karmen. Seconds later the guy was driving off, so I guess everything stayed in place for him. Good thing.

Then Karmen was feeling it and "chicked" us for a bit, but it was all good. Captain Bob and I chatted away for a few miles, and then we rolled into the place where we had started. A nice ride, and the bigger gear didn't feel so bad after all. I guess I warmed up!

I know, I know. People will look at the images and say it is very flat. Well, I am making all my images of gravel leading up to trans Iowa look flat to give those tuning in for info on the roads for the event a false sense of security. Yes......I am devious that way!
Posted by Guitar Ted at 1:00 AM