A Bit Of Sunshine 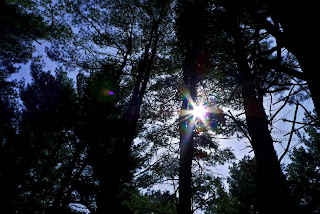 Sun Through The Pine Trees: image by Captain Bob and Guitar Ted

The past couple of days have been highly stressful and I've been sort of a wreck. Captain Bob  got ahold of me Tuesday and asked if I would be up for a ride at The Camp on Wednesday. I took him up on the offer.

It was a much needed time on the bike with a good friend. (Thanks Captain!)

After I arrived back home, I conjured up a plan to retrieve some goods sent by Gu Nutrition for T.I.V7. I grabbed the Xtracycle and pedaled over to the shop. 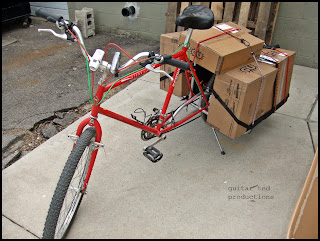 That's five cases of Gu Nutrition product on there folks. It was heavy! The frame was swaying all over the place and wiggling made it worse. It was like riding rollers- the calmer and smoother you rode it, the better off you were and the "quieter" the frame was.

Mashing even the least little bit on the pedals resulted in a womble that would start to resonate and I never let it get beyond that. I was afraid the frame would break!

Slow and easy was the order of the day, and I made it home without any issues in 40 minutes. Not bad for a commute that normally takes about 20 minutes at "normal" speeds.  Plus, I saved a bunch of gas money, and got a great exercise in form!

I got a few odd looks from passers-by, but as I usually find, when it comes to bicycles, only the children that noticed me were smiling and thought it was really interesting. Adults can be such a bore sometimes!

Glad it worked out to ride together. Thanks! It was a nice day.

the poor schwinn was probably like, man...what's going on?