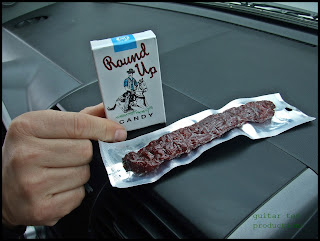 Convenience Store, Garwin, Iowa: 11:30am:  We had been checking out the crazy B Road on 270th in Tama County, then we left there to go onward, but we needed a stop for some munchies.

I found Garwin, Iowa's convenience store a few years back when out riding recon for the Guitar Ted Death Ride Invitational. I stopped in to see if it might make a suitable stop for that event. Well, the lady at the counter, who was middle aged, was wearing a washer-worn, faded Guns N Roses t-shirt. I remember thinking it was sort of odd. Then, two weeks later on the GTDRI, we stopped, and we found the same lady with the same t-shirt on. Wow! That was fantastic!

Only a couple of weeks prior to T.I.V7 I got to check back in, and the character working the counter, a big fella with a trucker cap, ripped sleeve t-shirt, and hairy arms all tatted up, made the stop amusing again. So it was with great expectation that I walked in this place last Saturday. I was a bit let down by the low character factor, but David walked out with a pack of candy cigarettes! No way! I hadn't seen those in well over 30 years. 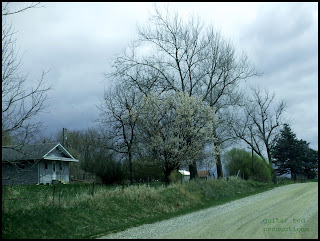 The afternoon wore on. We were getting some information on some of the action out there. It seemed that the lead four were John Gorrilla, Tim Ek, Charlie Farrow, and an unknown fella. Hmm.....who could that be. It was fun to speculate on the possible identity of the person and on the race strategy. We knew a couple of lone chasers were behind these fellows, and one was Dennis Grelk.

<====A flowering tree that caught my attention Saturday.

We also knew that at least three of the five women that had started were still trying to make it back to Grinnell. We were silently rooting for them. Trans Iowa just hasn't seemed to work for the women, and we wanted that to change. Beyond this, we were just cruising along, checking out roads. 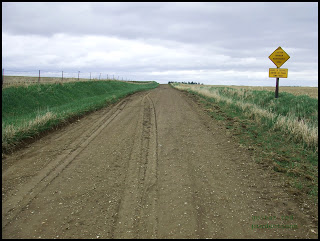 <===Some of the B Roads were starting to shape up, but not enough for cyclists.

The day was getting cloudy, chilly, and the wind wasn't going away. The hills were punctuated by straights of rolling countryside here and there. We crossed Highway 96, and just west of Traer, we had a section I dubbed the "Wolf Creek Walls".  Traer went by, then a B Road, then on to Dysart. Here was another of the features of this year's course that I was particularly fond of. It was the "Old Creamery Trail", a converted rail bed that was a pretty rustic, cobbled together bike path which David and I had a few wonderful night rides on.  This went on for 8 miles through Garrison. There it went right on to a grassy strip lined with landscaping bushes. It looked and felt as though you might be trespassing on private land, but we weren't. That isn't how we roll at Trans Iowa. 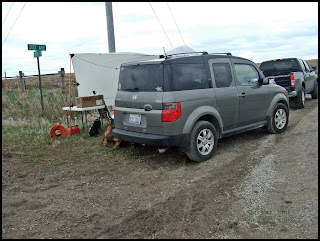 <===Checkpoint #2 volunteers, Wally and George had probably the coolest little checkpoint stop ever in a Trans Iowa.

Just south of Norway, Iowa, where the Iowa Baseball Hall Of Fame is, we chose a gravel and B Road intersection to serve as the spot for Checkpoint #2. The volunteers, Wally, George, and Joshua were all there. Wally and George had a primo Element with a tarp, generator, i-Pod stereo system, movies, and a freakin' generator to run it all with!

There goes my idea of having it be primitive! Ha! It was awesome though, and Wally, George, and Joshua were joined by Jim Thill, who had not made it to Checkpoint #1 in time. We all had a great time telling stories, laughing, and freezing our butts off in the country for a few hours on Saturday afternoon.

Later on, some of the Checkpoint #1 folks stopped by, and we had Jeff Fring, the videographer,  show up as well. It was getting to be a bit of a problem with regards to cars! It wouldn't be long though until we were off again. Night time wasn't far away, and we wanted to stay ahead of the leaders once they got in.

Is it sick that I wanted to stay around just to go hang at CP#2 with those guys. Had a great time chatting with them when they hit CP#1 and had I known they had that setup flowing I might have called the family and said we were staying another night!

Thanks again GT - you and DP rock for allowing this to take place!

Josh and Jim really added to the fun during the day at Checkpoint 2. Those are 2 really cool guys and man did our conversations throughout the day cover a range of topics! I did have a lot of fun hanging out with them.

I have to say that everyone I met at Trans Iowa, riders or support - all are top notch folks. I had a great time.

that creamery trail was super nice