I'm not sure what they call this video of Paris-Roubaix, presumably filmed last weekend, but "Wheels and Stones" seems to be a fitting title. It is a great race, Paris-Roubaix, not only because of the brutal toughness of it, but also because it demands that road biking break from traditions of today to use technologies from the past.

I was reading some coverage of the event, and in particular, the tech coverage. Stories of box section aluminum rims, cantilever brakes, and big, fat tubular tires. Lengthened chassis and extended fork rakes. Double padded bars, and special saddle and handlebar choices.

Man! They should make every road race go over stuff like this! It's what people are drawn to more than, say, the super-smooth tarmac used in the big Tours. If it wasn't for the brutal mountain stages and the time trial machine "geek-out", the Tour de France would be nothing. That's right folks, a race that is playing second fiddle to things like Paris-Roubaix, as far as I'm concerned. 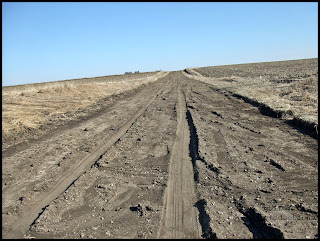 I have noticed something since putting Gravel Grinder News up on the "inner-webs", and it has to do with what folks are naming their events. If you take a minute to look at the ride calendar their, you'll notice a lot of references to Paris-Roubaix. Not too many for other events like the Tour.

Of course, "gravel grinding" and cobbles have a little bit in common in that you are dealing with rough stones, but the similarities end there. Heck, Trans Iowa garnered a comparison early on, not for the gravel roads, but for the completely dirt "B" Maintenance roads we inadvertently found and left in during our initial recon missions. Why? Dirt and cobbles have zero in common, right?  Well, it isn't so much the roads, but the challenges they engender that make the comparisons work, I think.

Trans Iowa, or any other gravel grinder, is harder because of the roads, and demands a different approach than a road racer on a road racing bike would take. In fact, a road racing bike isn't a real good choice at all, and the self-sufficiency standard most of these gravel events employ hearkens back to an earlier era in cycling, or at least our feeble, romanticizing would like to think so.

At any rate, their is a connection to the European roots of cycling, and especially the Northern European Classics that cover the cobbles and run through the rural countryside.We may not have the classy film, orchestral soundtrack, or throngs of Belgian beer swilling fans roadside, but we have something good going on here out on the gravel just the same.

Um, we have New Belgum beer on the road side!

Pretty impressive video considering the event was only two days ago! Get a load of Kurt-Asle Arvesen going by from 0:46-0:50 with no saddle. He rode 20k like that. Talk about a hard dude..

I agree that P-R leaves the Tour in its dust. It's a beautiful thing.

I commented to you a while back that I thought the T.I. is a North American spring classic. I believe it will be recognized as such.
ari

The only thing that would make that race and the Tour better would be seeing them race with limited support like the rest of us. The whole car train after the pack just needs to go away.

They call it, Paris-Roubaix Up Close.