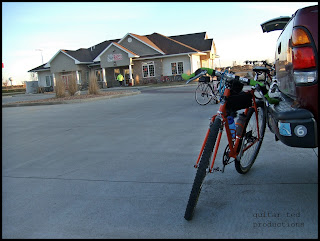 The second event I have taken part in for 2011, the Renegade Gents Race, was a very unique event in that it was a "team" event. It was billed as a 75 mile gravel grinder "team time trial" type event. The start was at Kyle's Bikes in Ankeny, Iowa on Saturday.

I was "recruited" to be on a team with T.I.V7's "official photographer", Steve Fuller. Steve teamed me up with some other Des Moines cats that I was unfamiliar with. They were Sam Auen, Bob Moural, and David Cornelison. The start time was handicapped by race organizers according to their perception of team strength. Weaker teams went first, stronger, faster teams started later on. Each team had to leave the start line together, ride together, and finish together. So, even though I didn't really know the guys I was riding with, chances are I would before the day was out. 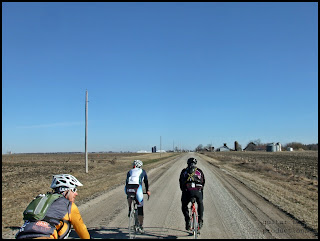 I had to leave town really early to make it to Kyle's at our team's agreed upon meeting time of 7:30am. Driving down in the dark required some coffee and really loud music.I didn't get the coffee, but I stayed awake despite that.

When I got there I met a few familiar faces, and Steve Fuller, our captain, was there. I signed in, got my cool "spoke card" cue sheet, and took care of that lack of coffee!

A little later, Steve rolled up to me and said we were missing one team member. Oh well, if we did have only four, we'd just do the ride anyway. Then, at about the last possible minute, our final team member rolled in, and we were good to go! On the bikes now, we had to get over the busy road by Kyle's to a small park where we were to roll out at 8:20AM, the third team of fifteen to take the start. Somehow or another, we rode through a time warp and were told by the start person that we were two minutes late! What the heck! 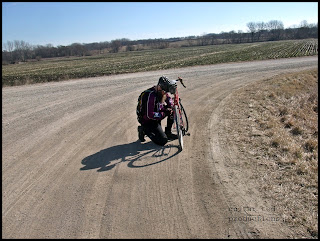 Oh well, we didn't have time to dilly-dally, so we just quickly lined up, and then we were off. Almost immediately after pulling out, Sam said his crank arm had "issues". We would have to stop. It was his FSA crank, and the left arm was really loose! Sam said he was going to ceremoniously burn the thing, "if" he made it, and that this might be an ongoing issue. I had an idea, but we were in a hurry, and hey! There went the team that was to start behind us. Wow! We hadn't gone more than a few blocks and were getting passed! We went off in hot pursuit.

This all happened on pavement going out of Ankeny northward. We finally hit gravel, and noticed that the team that had just passed us had made an error and turned left too early. We laughed and motored onwards, glad that we had regained our position. 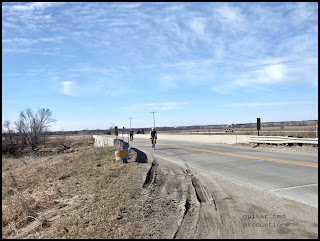 Well, that team that was off course figured it out in about a half mile, turned around, and gave chase. Meanwhile, we caught and passed a team, and then the team behind us passed us- again! (They ended up winning. Hmmm.......I bet they don't get an early depart time next time the race is held!)

Well, we were headed into a dead flat ten mile stretch with a head wind. What a grind! Then we finally turned out of it eastwards and hit a really fast, mostly down hill stretch of gravel. David was telling me that missing all the chunky goodness and soft spots on his road bike was really testing him. He said he wished he'd have brought a cross bike. Well, he really wished it after he flatted in this section. We had lost him, so we stopped at the bridge pictured at left to wait, Meanwhile, three or four teams passed us while we waited. Sam re-tightened the cranks, and since we had more time, I suggested he really crank down the pinch bolts. It held the rest of the ride for him. Meanwhile, Steve rode back looking for David, and soon we were all back together. 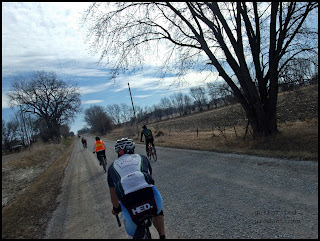 The team was getting a groove on now. Sam, who I was thinking should be named "Motoruis S", due to the killer pace he could maintain, and Bob were killing it up front, while I was trying to chase them down. David was flitting about here and there trying to keep from hitting the chunky stuff, while our good Captain was just behind me. Or was he?

Then I noticed Steve was gone. We all decided we had better wait for him. So we found a nice spot and sat. Some teams we had re-passed went by- again! More fast teams went by, and still no Steve. I called him up then, and he was just a short distance away. Soon he topped the hill we were on and told us he had flatted. Off we went again, this time Sam and Bob lit it up even more. I was chasing from about 300 meters behind, but those two were relentless. I don't know where Steve and David are, because I was head down and grinding. Then we sort of came together for a bit. 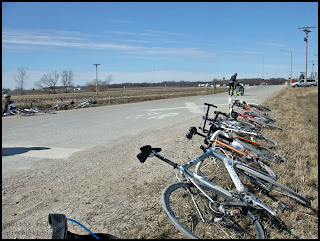 Then I got a bug and took a flyer for awhile. There was a team just up the road from us, and I wanted to reel them in. The road turned to chip seal, then outright pavement for a bit. This was bad for me. My set up was stronger on gravel. Had the course been all gravel here, I would have gotten to them, but they were getting away from me when David pulled up behind me and said we should all roll into the checkpoint together. I sat up then and just rolled in with our team.

We spent some time at the checkpoint where Sam broke off a chunk of an awesome chicken burrito and shared it with me. Thanks Sam! That was spot on for me. I also had a couple of Budweisers and some "energy drink". Then we hit the road again. 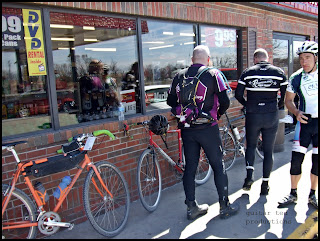 We were looking at the tail end of Sam for the most part of the remaining mileage. That dude's motor is amazing! He told me he rides bicycles all the time and has 3,000 miles in for the year already. Wow! I was floored. No wonder he could just ride us off his wheel like that.

Most of the rest of the ride was pavement. We rolled into a Casey's at Mile 53 for a last stage recharge for the finish line. We had just passed a team coming into the Casey's and they re-passed us while we were there. So, we tried to run them down coming into the finish.

The thing was, the finish wasn't flat like the start. It was long rollers, and we had tired legs. It was tough, but we brought things together right at the end and were set up for a sprint to the finish line. 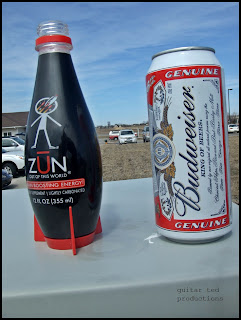 Coming in to Kyle's there were a few tricky turns. One of them was off a round-a-bout. I screwed up thinking we were going straight through, but Sam knew to go to the right. Well, he was on my left, and as he swung his big red Salsa rig right, I had to go veering off the round-a-bout, and gather myself up a bit.

Well, that put me off the back of the group, and I sprinted till I saw spots, but I never could regain the small group, and since the time trial scores the last guy through as your finishing time for the team, we lost a spot at the end due to that mistake.

Oh well! I think we all had fun despite my boneheaded maneuver. (I never claimed to be a roadie!) Anyway, sorry about that team mates!

The event was a blast, and I recommend it to anyone. Don't worry about a bicycle, you could use anything. There were full on roadie rigs, like David's on my team, to a Salsa Mukluk. (Yes- he finished on it!) The event was low-key, had a great atmosphere, and  the volunteers and organizers were great. Of course, it didn't hurt that it was a picture perfect day.

I was riding pretty well, and my bicycle worked really well. I made some great friends on the ride, and I will try to get back for this event, or something like it in the Des Moines area again. All in all, a big success for me. And as far as the results go, well- We placed 11th out of fifteen teams, so we did all right, even with our mechanicals. Thanks team mates! It was a good day on the bike with great people.
Posted by Guitar Ted at 1:00 AM

Thank you (and Mrs G. Ted) for making the drive down and taking part in the event with us. :) I wanted everyone to finish, have fun, and get a good solid ride in. Successful on all accounts. Sam and Bob are proof that regular riding means a lot to fitness.