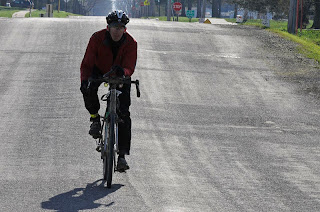 Rural Jasper County: 8:30am: Steve Fuller sees Dennis Grelk cross the highway and sends us a message to the effect that he is looking strong.

<===Dennis Grelk in the final few meters of the event. Image courtesy of Wally Kilburg.


At this point, David and I had already been informed by John Gorrilla's wife that he had suffered another flat tire, his fifth of the event. He had no tubes, and was forced to take the time to patch the one he had. Obviously, John was not going to catch Dennis. We Tweeted that Dennis was going to win T.I.V7 and the word spread like crazy. At 8:50am Dennis Grelk motored into the final corner of T.I.V7, on a street named Bliss. (Really!)

David and I motored into the finish after Dennis had already left, but we made it back in time for Ek and Krause to come in second and third.

<===Tim Ek raises his arms as he leads in Troy Krause to finish T.I.V7 with his second deuce finish in three years.
It wasn't long after that and.... 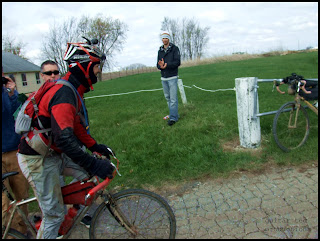 Onlookers gathered around to hear the tales of the three finishers as they peeled mud stained layers of clothing off and tried to stretch muscles unused to standing after nearly 30 hours of bicycling.

<===Charlie Farrow comes to a stop after 330 miles plus of gravel grinding.

Although it wasn't at all planned this way, I sort of became a co-interviewer of the finishers as Jeff Fring was filming them  giving their view of the event. Then most of them collapsed to the inviting green turf and shared a few quiet moments as onlookers stared at these road-worn men in silent disbelief mixed with a good amount of awe. 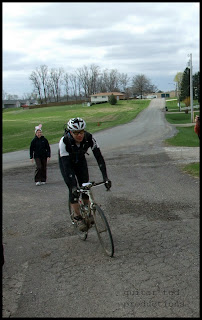 <====John Gorrilla makes the final turn as his wife looks on.

Then a while went by before John Gorilla pulled up over the little finishing rise and came in for a 5th place finish. While he said he was happy with his performance, and for completing an entire Trans Iowa, (John won a shortened T.I.V4), he was obviously disappointed with how things played out at the end.

It was generally agreed upon by his competitors that John was the strongest rider in the event, but sometimes things don't always go the way that they should. Actually, I was surprised that John didn't get passed by Sean Mailen, who when we had last seen him, was only about 30 yards off the back of the Ek, Krause, Farrow group. But, we still didn't have any sight of ol' Sean. A little while later though..... 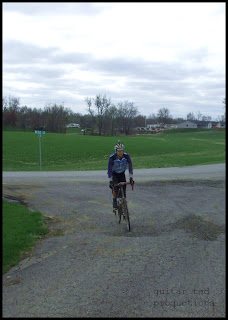 Sean was pretty stoked to finish Trans Iowa. He said it was "really tough!"(Yup! I'd agree with that!)

I know a lot of folks at Trans Iowa were pretty impressed by Sean, and if he comes back for more long gravel events, he'll be a marked man now.

Sean spent a long time at the front of the event and only faded a bit in the final miles, or else he may have snicked off a few higher places than he did.

Well, after Sean was interviewed, he retired to the grass as well. Then David and I knew it would be a bit before the next group of guys would come rolling in. We didn't think it would be almost two hours more though!

When John Williams pulled in, it was pretty cool to see his kids and wife greeting him. Eric Brunt was pretty chuffed to finish, and Adam Boone did it in his first try, as did John. Another thing to note was that Adam Boone won the "Industry Cup", becoming the first in that category to finish a Trans Iowa in the category's second year of inclusion in the event. Adam was representing Gu Energy, which was a sponsor of T.I.V7.

<===Mike Johnson rolls in for a solo 10th place finish.

About a half an hour later, in a surprise to David and I, Mike Johnson rolled in solo.  We had come across Mike riding with three others earlier in the morning and had fully expected they would stay together to finish. Mike said he felt it was time for him to push on when the others were a bit hesitant for some reason and therefore he rolled on in solo. 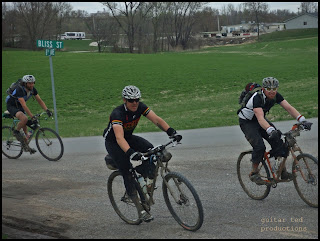 Single speed finishers, Aaron Gammel and Ben Shockey looked pretty good as they got off their bikes with Jonathan Weissman, who was another first time Trans Iowan that finished in his first attempt.

It seems that if we get a full Trans Iowa in, we always get first timers that finish. Some folks don't do it after multiple tries, and some take a few years. Doesn't seem to be any rhyme or reason to that. Just something I've noted over the years. 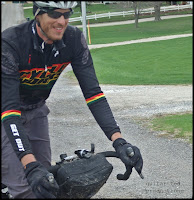 <==A smiling Corey Godfrey rolls in after quite the adventure!

Well, I guess we really need to point out something extraordinary here. Given the circumstances, (a blown rear derailleur and tweaked frame), most of us would pack it in, and I know no one would even think twice about that decision. However; that isn't how Cornbread rolls. He went back to Grinnell, got fixed up to single speed, and hit the road in search of Trans Iowa riders to have an adventure with.

After over 310 miles, I'd say that smile on his face tells the story. A good job of taking a bad situation and turning into something awesome.

Time was running short. Who else would cross the line at T.I.V7?

<====Charles Parsons, Jeremy Fry, and Joe Mann get in with 45 minutes to spare.

Wow! Three more guys pull it off. Charles Parsons, Jeremy Fry, and first time finisher, Joe Mann make it into the final turn. We talk with each of them briefly, but the thing on our minds was, "Would Janna Vavre become our first Women's Open finisher?" Time was running out. The cut off for the event was 2pm, and as the minutes ticked away, we were starting to wonder if it would happen. Then at about 1:43 pm we saw some riders. The final two finishers of Trans Iowa V7, and sure enough, one of them was Janna. 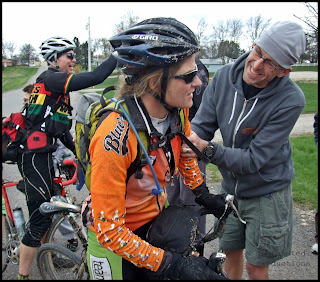 <===Janna Vavre is congratulated by Troy Krause upon her finish at T.I.V7. Scott Bigelow, in the background, also finished in his first attempt.

It meant a lot for us to finally have a woman finish Trans Iowa. I am not sure exactly why we wanted to see that happen so badly. I guess there are several reasons, but no matter. Congratulations to Janna. She can always say she was the first, and no one can take that away from her.

I asked her what she thought about Trans Iowa, and she replied that she didn't care to ever see a B Road again!

Yeah, well maybe a wet B Road, I could agree with that one!

Janna and Scott were the last two possible riders that could have finished, as all the others had pulled the plug already. It was 2:00pm, and Trans Iowa V7 was over. David and I left the finish line area to go fetch my truck, since he needed to get back home. I filed a final audio report, and I pointed "The Truck With No Name" northward to go home and see my family. T.I.V7 as an event was over, but I wasn't done with T.I.V7. Not by a long shot.

I'll close out my rambling about T.I.V7 tomorrow with a final post containing my afterthoughts on the event.
Posted by Guitar Ted at 1:00 AM

It is very impressive to see so many finishers. This TI arguably may be the toughest one where riders road the whole distance. Great job to all the riders!