Now that I have had about 300 plus miles on two different Luxy Bars, I am ready to give a bit of an impression on them here. I am still waiting to get some actual off-road trail time on them before I do a full on update elsewhere.

I have used the Luxy both in geared and in single speed set ups, so this impression will reflect both those types of uses. The Luxy Bar was designed by Brant Richards, who also had a hand in designing the On One Midge Bar. The Ragley Luxy Bar couldn't be more different than that bar though. (Well, maybe......if it was a pavement drop bar!) 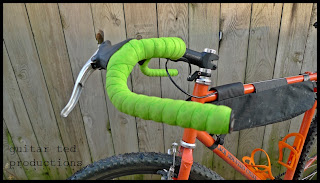 The bar that is the closest to the design of the Luxy would easily be the Salsa Cycles Woodchipper. Both bars are really wide, have flared extensions, and minimal reach. However; there are significant differences between them. The second image here shows how the Luxy bar has an extension that is nearly parallel to the tops, while the Woodchipper's is clearly not. This will separate those who like the extensions to point downward to the rear axle while having "horizontal" tops. The Woodchipper easily assumes that position, the Luxy does not, but it does mimic a "classic" "Maes" type relationship between the tops and extensions, only with flare! 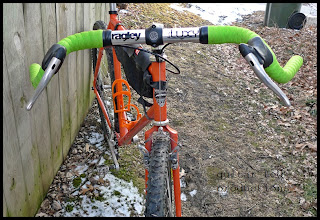 The other two big differences can be seen here in my third image of the Luxy. The way the drops slant outwards to the extensions is more dramatic than the Woodchipper, and finally, the Luxy features a 31.8mm top section. All the way from drop to drop, the top section is 31.8mm. That makes the tops a great gripping section for cruising, or for long, grinding climbs.

So, there are the comparison, so how does it ride? Well, it does really well, as a matter of fact. I thought going in that the Luxy would be a stiff, unforgiving bar, due to the big diameter top section. Well, my fears were unfounded. The Luxy was a rather smooth bar, actually. At first, I thought it may be the cheapo black stem shown here with the two bolt face plate, so I upgraded this to a Ritchey Classic 4 Axis stem . 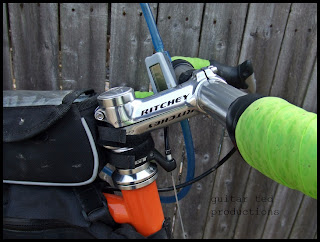 The Ritchey stem took flex out of the equation from the stem area, but still, the Luxy proved to be smooth. I think this may be due to the fact that the Luxy Bar has a weight similar to a Woodchipper, which would indicate to me that the wall thicknesses on the Luxy might be thinner than those on a Woodchipper, lending a nice, smooth, but not overtly flexy feel in the drops.

Now, how does it work with geared set ups? Well, I had the Luxys both set up geared with Shimano STI levers, so here's a look at that right here..... 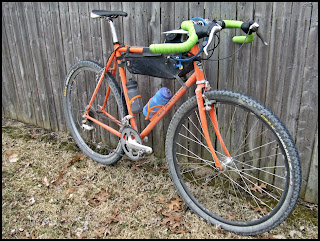 I found that the levers are easily set up in terms of reach from the drops to do any braking, and for shifting too. One might think the hoods would be all "screwed up" as a grip position at that angle, but quite frankly, I felt it was just fine the few times I actually used the hoods. Interestingly, the hoods, which angle inwards as you look from the top of the bars, becomes a sort of "pseudo-aero bar" position. I wouldn't recommend that but for anything really smooth though!

Some folks have commented on the really long extensions, saying they can not imagine needing anything that long. Well, I would say that there are those who really can not imagine not having them that long, and furthermore, that is what saws are for. You can take some off, but you can not really add length, so look at the Luxy in that way if you are wishing for a shorter extension. (That goes for Woodchippers too, by the way.)

So far I would put the Luxy on par with a Woodchipper. Both are really specialized, and great at what they are designed for. Each is different enough that you can easily find things to like, or not, about them, or just have both! I have gravitated towards the Luxy a bit myself for the way the drop's extensions are more parallel to the tops, which I prefer, but I still really like Woodchippers too.

Mark - what tire are you running on the Monster?

Nice bike by the way - I just wish our weather would clear up so I could ride it more often!

Thanks again for the lead to Varley - great stuff!

Also - love the Luxy Bars as well. As close as they are to the woodchipper - I can definitely tell a difference but it could be bikes as well!

Have a great week

@Bill G: Those are the GEAX Barro Race TNT versions. The front rim is a very narrow Matrix model from the late 80's, and even with that, the tire barely clears the fork blades. OK for dry, but a no-go with any "accumulation" of dirt.

Darn it.....I tried to resist buying these but you wore me down!

Great! Now you've go me thinking. I love the Woodchippers, but that parallel to the tops looks mighty comfortable.