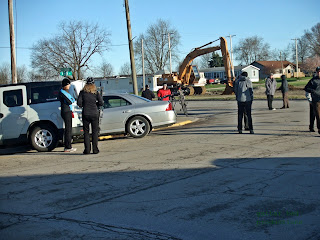 <====Checkpoint #1 volunteers and hangars on awaiting the arrival of riders.

After the hiccups in the very beginning stages of the event, we went onward through the ever brightening day. as the roads became more visible, we could discern that the moisture was just enough to cause the first half inch of the road surface to be soupy. From this point and onward, the roads improved quickly, and were not an issue for the rest of the event. What was becoming an issue was the wind. The skies were blue, and the sun was bright. It was a great looking day, but as we stood in the streets of Baxter, the wind was biting and chilled us to the bone. The riders coming westward faced the full brunt of its force as they toiled up the steeps of Jasper County. 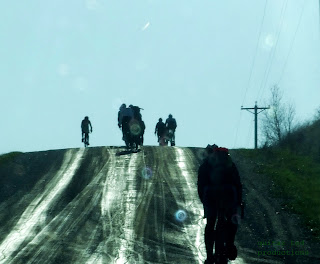 At this point David and I were a bit baffled by the lateness of the first riders into the checkpoint.  We had thought the first group would come in between 7-7:30am, but nothing happened as the time approached 8am. Many of us went up to a convenience store across town for some breakfast. The first food I had eaten all day.

Eventually, our videographer for the event showed up. Jeff told us that he had witnessed a big mix up where riders had went up a B Road and were confused as to where to go. This was obviously a concern, as we hadn't put any B Roads in the first leg. This was obviously what had slowed them down. 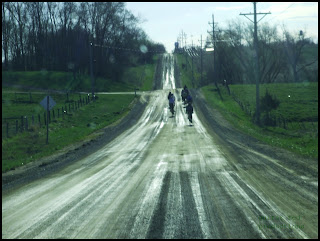 David and I then decided to drive the course backward to ascertain where the lead group might be at.  We were hoping that they would be in before the 9:15 AM cut off time, and then we saw them. Just a few miles away from Baxter, where Phil Wood had retired, the riders with mud covered faces were streaming around a fast left hander towards us.

We followed them for a bit, then scooted around to forewarn the checkpoint folks that they were upon them. We didn't stick around to watch, as we knew of another re-route from my drive in the day before that needed to be marked. Off we went towards Checkpoint #2, a long way away! 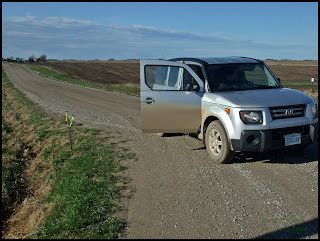 <==The corner was marked, the wind was still blowing, and here come the clouds!

The course went about 13 miles straight east from our re-route with the wind. David was expecting that the riders would be flying in this section. Certainly, the opportunity to bag some time was awaiting those with the legs and the next set of cue sheets. Unfortunately, many just missed making it, and their day was done.

Still, 42 folks made it through to continue onward toward the next checkpoint which came at Mile 173 into the loop. That was over half of the 76 starters still in the event. Some were snake bitten by the derailment earlier up the B Road. Others were stymied by the 25mph constant blast out of the West in combination with the hills. Some faced mechanicals that ended their day.

Up the road were the usual suspects. John Gorrilla leading a group of about 10 that included Tim Ek, Charlie Farrow, Sean Mailen, and Dennis Grelk, amongst others. It was David and my opinion that Gorrilla would push the pace until he had burned off those not able to hang on and then work with the smaller group that resulted. Who would that be?

Who would be the last men in that group?
Posted by Guitar Ted at 1:00 AM

Are there REALLY folks complaining about something that happened during a FREE event, where it was clearly stated in detail that each participant was completely responsible for themselves?

We have a word for such here in NC but I don't use it in polite society.