Some Random Shots (And Thoughts) 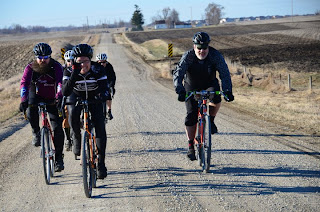 I think my mind turned to the "off mode" for this blog post. So, with that said, here are some real random images, with cycling being the only common thread here.

First up we have this from Saturday's Renegade Gents Race. I think it looks a little like "The Four Horsemen of the Apocalypse", only there are five of us there if you look hard enough! At any rate, a pretty scary site with us three big fellers up front!

I'm always amazed when I see myself amongst most "cyclists". I look like the linebacker while the other guys look like....I dunno.....the water boys! Only thing is, looking like a "water boy" in cycling is a good thing. Usually. Oh well! I yam what I yam! 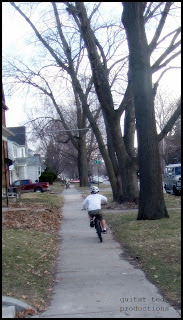 So, last week my son, who is 7, learned how to ride a bicycle. Pretty cool, if I say so myself. (And I do!) Yeah, he takes after his Dad in that he will also not look like your typical "cyclist" out there. It's all good though. While he may not ever be the next big road racing star, I sure hope he has as much enjoyment from the sport as I have had.

The best thing is that he can take from my experiences and hopefully add his own twist to it. I don't know which roads and trails he might ride down, but I hope to share a few with him before it is my time to dismount for the last time.

Anyway, it has been a joy to me that he has found that cycling is fun. I had forgotten that riding around the block might be a "big deal". I can't wait to see what other things I may have forgotten as we ride together in the years to come. (Well, I hope that happens!) 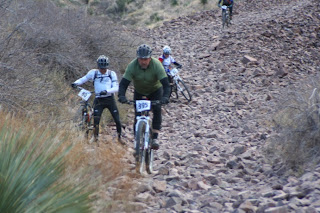 Heading Back To The Desert:

I've been starting to think about my next big trip to El Paso, Texas, slated for the first two full weeks in June.

As I've said here before, El Paso has some of the toughest riding anywhere. Here you can see an image from last January of the "Puzzler", an endurance event held in El Paso's back yard at Franklin Mountain State Park. It's like the image here for much of the riding that the trails offer. Rocks, rocks, and more rocks of every imaginable size and shape. The only real common denominator is that they sound uncannily like broken pottery when the tires make them clink together as a cyclist rides over them.

I'm pretty stoked to be going back there, and you can bet I'll be suffering a bit of West Texas heat to ride out there again. 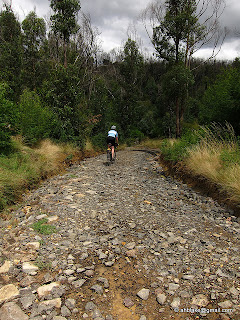 And Speaking Of Rocks...

I was sent  this image by the fellas that put on the Melbourne Gravel Grinders in Australia. I really am drawn to this image. I like the "road" and its primitive nature. It just makes me want to grab a bike and see where this goes.

Maybe someday I'll get the chance to head over there and ride that. I'm sure we have something similar around the U.S. though.

Something about rocks. I dunno what it is. Maybe it is because I live in a place where dirt is the main feature and rocks are kind of rare, at least off-road! Perhaps there are those who would really like to ride on our dirt and get away from rocks. Maybe.

So, there you are. A totally random post for your Tuesday. I like to call this sort of thing "randomonium", although all the cool kids these days call it a "mash-up". That sounds "messy" to me. I like "randomonium" better. But I am just an oddball cyclist!

At 6'3 and more pounds than I am going to claim here, I have been the linebacker amongst the waterboys for so long I am beginning to feel like the Scorekeeper amongst the soccer players.

Never mind your size, how come the rest of the team are riding in a fairly well packed, time trial/echelon formation, while you've gone 'maverick'?

@cowpassage: ha! Mrs. Guitar Ted said the same thing! Well, to answer you, the photographer was right in the gap between us, standing in the road taking that shot. The rest of the guys had been in echelon before the shot was taken.

And of course, picking a good line and sticking to it forces you to ride in ways you otherwise wouldn't on a paved surface.

GT had been pulling us along for a good section of this stretch. I'm sure he was pulling off right here so that everyone could be in the photo. And yes, those were three good sized fellers at the front of that pack. :)

Maybe there needs to be a Linebacker Gravel Metric?

"When you really want your Gravel Pounded!"

Another 200lb rider here. Last year I got the geology bug and just really got into rocks and their formation and history of the lands. Coupling that with my love of biking is about as much fun as a guy can have. The North Shore and Iron Range of MN are by far the funnest places I've ever biked....

Love the pic of your son! It's really cool.