Sending Up A Prayer 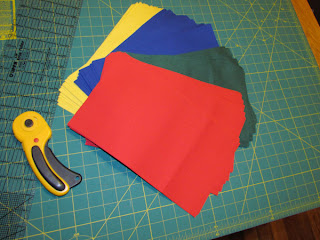 With this crazy weather we've experienced over the past five days, our course conditions have gone from primo to crapola. But that could totally change in the next few days again. Who knows? All we can do is send up some prayers for better weather. And ya know what? I think we're going to get it.

Speaking of prayers, I have to tell the story behind our "prayer flag" idea for T.I.V7. It came about while we were doing "bicycle recon" last fall.

David showed me the spot he thought would make for a great "remote checkpoint", which was an idea I came up with to put a checkpoint in a place other than a convenience store. We actually were going to implement that for last year, but we never made it as far as Checkpoint #3. Oh well! So, the idea went to this year's course, and David had spied out this little intersection. 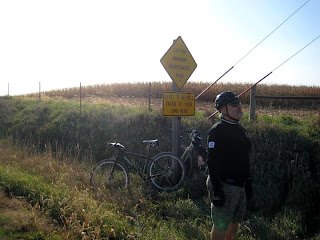 <===The spot that inspired the flag idea.

We were stopped walking around looking at how things might lay out. The car could go here, the guys could hang out here along this ditch embankment, and so on. Well, as I walked away to get back on my bike, I casually looked over to a utility pole that was guy wired to provide support in the constant Iowa wind. I thought about those pictures you see of Mount Everest expeditions, where Buddhist monks have tied their prayer flags to ropes and they fly ragged in the wind. Much like old seed corn bags and plastic wrap does from barbed wire fences in rural Iowa. I saw a kind of comparison there, and a tie in with the hopes and fears of Trans Iowa riders.

"What if, instead of number plates, we gave the guys prayer flags", I said, not expecting any answer. Well, David was inspired, and he actually pursued the idea later, and e-mailed me his thoughts. Well, here ya go! David is doing this for T.I.V7, and I think it is pretty cool.

So, you won't be getting a number plate for this years T.I. You'll get a "prayer flag". What you do with it afterward, well, that is up to you, if you are in the event. During the event, we'd like folks to tie it onto themselves, or their bike, and let it flap in the wind. We thought it would be cool if you had to pull out, if you would tie the flag to a fence, or a post, or a sign, to mark how far you made it. Or not. Maybe folks will want to keep these a long time. Maybe you'll blow yer nose in em and throw them out! We don't know.

And barring any unforeseen calamity, these will be in your bags at T.I.V7 check in.
Posted by Guitar Ted at 1:00 AM

The prayer flags seem very appropriate. I wish everyone a safe and "enjoyable" ride.

The question now is what to do with it. As badly as I want to keep it as a souvenir, I think I'm going to make myself earn it. If (and likely when) I don't, at least I'll leave a memorial marking the spot where I finally broke down.

We used to give these out at the start of SAR training events. Serves as nice reminder, plus has a myriad of uses. (Sweat rag, signal flag, trail marker, filter particulate matter out of water before sterilizing it)

Like it... Can I get a full rasta combo?

Make sure Charlie and the other DBD guys get the bigger ones so they are slowed by wind resistance.
ari