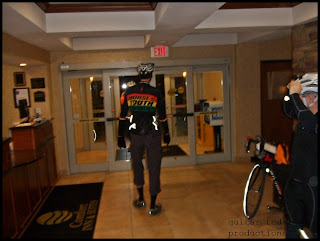 An unusual amount of activity is taking place for this time of the night. As usual, I couldn't sleep. Happens like this before every Trans Iowa. So, David and I didn't even really need alarm clocks. He was the first to get up and start getting ready.

<==Corey "Cornbread" Godfrey heading out to the start.

I followed suit and when we emerged into the lobby, we saw all manner of bicycles, gear, and riders clacking around in their cycling shoes and kit. Did anyone sleep at all before this event? 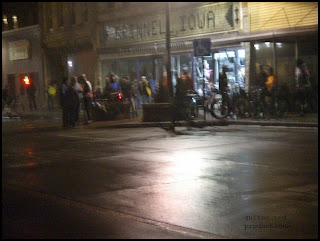 <===Riders gather in front of Bikes To You.

We rolled on down to the start in front of "Bikes To You" downtown. The main topic of discussion, of course, was the weather. It was drippy, foggy, and cool. just like last year. Nervousness was high.

The forecast called for the wind to pick up, and for partly cloudy skies. Nothing about rain, but you never know in Iowa.

We got down to the start line at about 3:30am, so I was short on time to do any audio update. I got the chance to check out just a few bikes, but we had to get some details on the roll out set in place, so it was pretty much all business as the time wore on to our 4AM start. 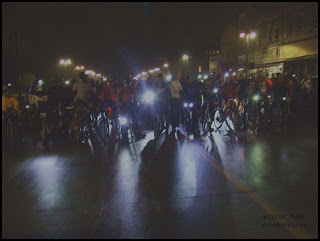 We had a couple of gals to help out by getting their cars to block Highway 6 as we crossed it. David pointed the Element in the right direction, and I called the riders up behind it for a few last minute reminders.

These little talks often make me feel like I am being a bit "parental" with these guys and gals, but of course, I don't really want anyone to get hurt, so I suppose it is only natural that I might admonish them a bit sternly as they prepare to take off.

Instead of tooting the Element's horn this time, I used the "horn" that I used at the Pre-race. A Salsa Woodchipper served to let everyone know that we were taking off. I just sounded a call on it, and off we went! Trans Iowa V7 was really happening. 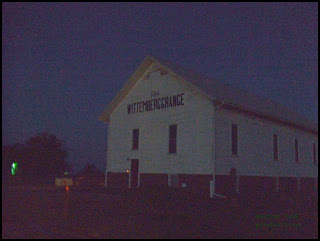 <===The Wittemburg Grange reflects the first glow of dawn's light.

It wasn't long before the elation of the start was wiped away though. We weren't very far into the event when we found a bridge out. A re-route! We snapped into action, and decided to go a mile north, then west, and a mile south to avoid the road in question.

Pounding in stakes and making streamers wasn't too tough, but the riders were flying, and they were upon us at the third corner we marked. Off we flew, just avoiding being swallowed by the on-coming pack. Their combined LED light output looked like a freight train light shining up the road in front of them.

Just then, we got a call from Steve, our photographer who was up the course. He said something "weird" was going on, and mentioned a County Sheriff's car, and some wandering soul that was being taken into custody. What the heck! Was this event doomed to disaster before we got 20 miles in? 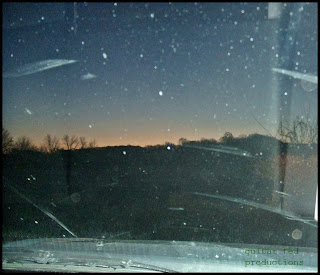 <===The sun shows first light on the eastern horizon through our spattered windscreen.

We found out later that Steve rolled up to his chosen spot on course to find a lonely soul standing in the dark in the middle of the road. As if this wasn't alarming enough, the fellow wanted his car towed out of the snow up the road. Not an unusual request two months ago, but we haven't had any snow for weeks!

Well, after a few anxious moments, Steve noted a very bright pair of lights approaching him. These were attached to a Sheriff's car. They frisked the guy down, and Steve mentioned that he had a lot of pills  in his pockets. Apparently, this fellow had been going up and down the road, bothering farm houses, and generally being a nuisance since midnight.

With that bit of weirdness behind us, and the re-routes done, David and I moved on towards Checkpoint #1, in Baxter, Iowa.
Posted by Guitar Ted at 1:00 AM