Note: The Trans Iowa Report for Version 7 will take a while to roll out. If you are not a fan, I would just plan on coming back in a week! It'll take me that long to unroll this for everyone else. Trans Iowa V7 started in earnest for me on Friday.....

Friday, April 22nd: I get everything loaded up into the "Truck With No Name". It had been spritzing moisture all morning, but as of load up time Friday, it had stopped. I figured I could make it without my impromptu tarp, which I stashed behind the seat in the cab. Meanwhile, I am dealing with stress over the last minute-ness of some of the T.I.V7 details and trying to remember everything I needed to bring before I left for Grinnell.

I get into the truck, and what do you know? It started pouring rain. Gah! Out comes the tarp, and I scurry to get it secured well enough to deal with 60mph driving. Was this going to end up like last year? Crap! It sure looked that way. If the roads were already soupy, we were in for a short weekend!

The plan was to scout some roads on the way down, hook up with David, and then get the Pre-Race Meat-Up underway. I saw the roads, and as I drove, I got more and more stoked about the event. They were actually in really decent shape. Some places were as good as it gets. David finally called me and said similar things about what he had seen of the roads so far. The only bummer? I found a B Road that had been converted to a C Road and gated over the winter, which meant a re-route. Luckily for us, (and really lucky for us, as we will see later),I had plenty of re-routing supplies on board the truck. 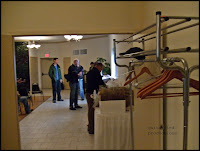 As I got into town, I drove by the finish line area, and the road out of town.  Everything looked primo! I met up with David at our motel, and we headed over to the venue for the meeting along with several racers who wanted to help out. The Trans Iowa veteran racer, if nothing else, can tote a box with the best of 'em! Thanks one and all for your extra hands!

We even had them stuffing our bags and getting things done for us was much easier because of their help. 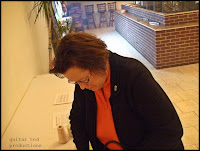 "Super-Chamber-woman", Sheryl Parmely was awesome, as usual. Always helpful and right there when we need her. In fact, she lobbied very hard for a discount on our meals at the Steakhouse. Yes- everyone's meals were subsidized. Amazing! Thanks to the Grinnell Chamber of Commerce! Thanks Sheryl!

We got a check in procedure started and riders were already standing in line to get signed on before 5pm. Thanks for being punctual guys and gals! Yes, we signed on our largest field of Women's Open riders ever with five and the largest Rookie Class ever with 37 riders. In all, 76 riders showed up and started Saturday morning, also a record. Trans Iowa V7 was already making history, and it hadn't even started yet!

The Grinnell Steakhouse then turned into the "Grinnell Smokehouse"! So many folks were grillin', the place smoked up in a hurry. Doors were flung open in an attempt to alleviate the situation, which worked out rather well, in the end. Food was consumed, conversations had, and old and new friends met. Good stuff all around. 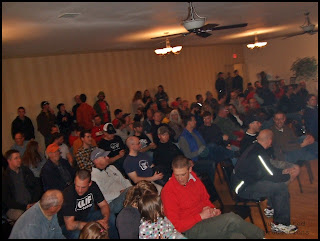 Meanwhile, the video/documentary project was being worked on by Jeff Fring. He had already sat me down for a half an hour interview, and was getting more beta at the pre-race. Steve Fuller, our still photography man, was clicking off a few images as well.

Checkpoint volunteers were on hand, and everything seemed to work quite well at the Meat-Up. Now, would the event go as well? Would the drizzle, which had finally ceased to fall, stay away? This and more in part Two of the T.I.V7 Race Report.
Posted by Guitar Ted at 11:27 PM

too many mistakes on my part to finish. too stubborn to turn back when i knew it was the wrong way to go. mistakes got compounded with more mistakes.

for most of the event i thought i had it in the bag even with the pushing and slow B roads.

lessons learned. 1-don't trust the guys in front of you. 2-pay super close attention to the cues. 3-keep eating.

Matt, I think one of the most consistent comments that I heard from the riders that came in places 7 and onwards was that they split up due to "navigational issues" with other riders in their group. I think there comes a point in the event where you have to do what is best for you, even if that means leaving your group and going it alone.

my navagational issues were decisions me and my riding partner made...bad decisions that i will try not to repeat because it took me out of the game.