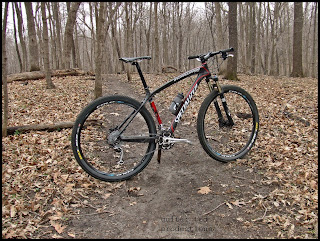 After last weeks Renegade Gents Race, where I felt I rode well, and quite hard, I started off the week with only some commuting, and that at a lower intensity than normal too. I could feel the effort in my legs from Saturday all the way into Wednesday.

I typically do trail testing on Wednesdays in season. Last Wednesday was my first session of the year, and I was not really feeling it. The legs were sluggish still, and so I went easy. That said, riding trails is far different than gravel grinding!

I found the constant cadence changes to be challenging, and of course, you react differently to this physically. It was good to put "the motor" through some different paces. Even though my legs were not reacting well on Wednesday. By Thursday, I had put the Fargo back on the road, and I rode it to and from work both Thursday and Friday. Each day I felt stronger, and Friday I took an extended loop back home.

Saturday I took the Stumpjumper out and this time I felt much, much more snap in the legs and I was really feeling much better. Cadence changes were not such a shock to the system, and the different gears and bikes were a good thing. That's right, I didn't ride the Orange Crush all week!

In fact, I am blessed with choices when it comes to bicycles. I could ride the Fargo quite easily at the DK 200, and it would be a fantastic choice. The Stumpjumper would be a great bike as well. That said, I am sticking to my choice for now. The only way I would switch up is if things look like they might be wet at the DK 200. The Fargo would fare much better both in handling and in terms of mud clearance if rain is in the forecast in Kansas.

Next up will be a tire swap on the bike and some more gravel on the Orange Crush.
Posted by Guitar Ted at 1:00 AM

i hope to be hitting some dirt later this week. maybe i;ll see ya out there.......