An Ode To A Brooks Saddle

"They" have said a lot of interesting things about Brooks saddles over my cycling career as a mechanic. They? Yeah......you know. Those crazies that love their leather Brooks Saddles. The ones that swear by their comfort, and move the same, deformed, crusty saddle from the old bike to the shiny new one, because "they" would never give up their Brooks. Never! 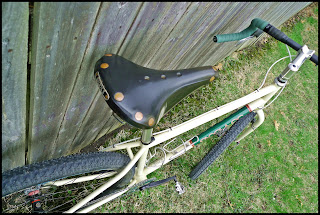 These are the saddles that have been crafted in England in the same manner since my Great Grand Dad was alive. (In Scotland!) Yeah.......and they haven't changed a thing since.

In fact, it is said that these saddles are perhaps the longest running product ever produced without a significant change in the history of mankind. That's pretty crazy.

Not only that, but it is also pretty crazy to see and feel your first new Brooks saddle. I will tell you in no uncertain terms that I thought the collective "they" that were singing the praises of these leather, steel, and copper contraptions were goofy. Maybe even conspiratorial. There seemed to be too much camaraderie amongst the Brooks followers. Suspiciously so. Hmm.....And those saddles, yes....let's get back to that. They were silly hard! The word "comfortable" seemed the furthest thing from my mind when I saw one of these things.

So, one thing led to another over time, and I got ahold of a Wrights leather saddle. It came as stock equipment on an old 70's ere Raleigh Gran Prix I got for next to nothing. Interestingly, Raleigh owned Brooks at the time the bike I had was made, but it had a Wrights saddle. Okay....

Well, anyway, the Wrights was in great shape and I figured, "Why not try it?" I was looking for a long distance, comfortable gravel grinding saddle, and this Wrights was gotten for next to nothing, so I figured I would try it, and also see if the leather saddle folks were on to something, or not. I rode it on the longest ride I've ever done in one day. It was a Guitar Ted Death Ride Invitational, and I rode over 160 miles.

The idea of a nicer Brooks leather saddle was instilled in me that day, because the Wrights wasn't quite right. I didn't get a Brooks right away, but last year, I finally pulled the trigger on one.

My Brooks started out as a Special edition Green B-17. I rode it a lot last year mounted on the Gryphon, and you know what? It wasn't at all uncomfortable. Not ever.

I will only lodge one very minor complaint. That is, the "Special Green" has turned to a "Special Ripe Olive". Maybe "Greek Olive". I don't have a clue why it has gone "to the dark side", but it no longer really matches the rest of the Gryphon's green bits. I guess that is okay. I will say that it feels fantastic to ride on, and I have yet to have to tension it. 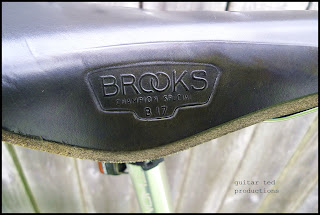 So, I guess "they" were right after all. This saddle is pretty darn comfy, and it seems to be holding up really well, unlike two other leather saddles I have tried which didn't even come close to being as nice as this Brooks Saddle.

I'm not planning on removing it from my Singular though, it is just perfect, right there where it is. Just like Brooks hasn't changed their techniques in well over a hundred years. Haven't needed to.

Sometimes you learn something good. Even though looks can be deceiving, and first impressions may not be great. I'm glad I found out otherwise.
Posted by Guitar Ted at 1:00 AM

I LOVE Brooks saddles! I'm one of the crazies that even like them right out of the box, not broken in yet. Though, to me they get better with age and I think they look a lot nicer with some patina ("Beausage" to quote Grant P.)to them.

I have Brooks on all my bikes except the mountain bikes (dont like them on sigle track) and they are very comfortable. I usually have to tension them the first time around 3-4k miles I figure with the bolt length there life span is probably 20k or more and for a $120-$300(I have a Philadelphia edition red swift on my cross bike) seat thats not bad. I really want one with the springs for my touring bike though.

Count me in as a convert this year as well. Though I had a bad experience with mine a rain storm I got caught out in.......think taffy like. I have a cover for that situation now though.

I put a B17 on my LHT when I got it, and although it took a bit of break in time, I loved it. So much so, that I moved it over to my Fargo. I put a NIB B67 I bought used from someone over the internet on my Mukluk the day it arrived home. That said, I haven't gotten crazy and put them on all of my bikes. I do have other saddles that fit me well and that I find just as comfortable over the long haul.

According to our Brooks Rep, it is important to not oversoak the saddle in proofhide. When it rains cover it with a bonnet.

It is my understanding that Raleigh owned Wrights, as well as Brooks. They specced the Wrights saddles on the less expensive 10-speeds in the line.

Much like the Ideale/ADGA situation at Peugeot, in the same time-frame.