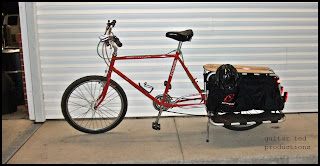 This is the story of a cast off Schwinn Sierra mountain bike. Vintage: 80's. It ain't much, but I like it.

The story begins with Captain Bob and I talking about how we should get a bicycle to check this whole 650B thing out. That was at least three years ago. Well, Captain Bob found, got given to him, or paid little or nothing for- this Schwinn.

It had a freewheel, horizontal drop outs, and the brakes......well, we'd figure that out sometime. Captain Bob parked it in some shed somewhere and well, it got pretty much forgotten.

Then Captain Bob was cleaning house to make way for a major remodel at his casa. "Did I want the Schwinn?", came the question one day. I said, "sure", and he brought it over one day to my place in its dusty, spider ridden condition. I parked it in the garage, where- you guessed it- I forgot all about it, again.

Well, it sat out there, like a lot of bikes across the nation and like this particular bike probably had, for most of its existence. Such a shame. I mean, there are a lot of people that would cherish this bicycle, really! (Don't be a snob!) I knew that, and I sorta figured one day I'd meet that person and I'd pass it along.

Then "A-Lo" came into the picture. He used to work with me, and now he spends his time hanging around in "The Mitten" working at Velocity U.S.A. and going to seminary. Well, he wanted my old Schwinn Voyageur, and he had an Xtracycle Free Radical kit to trade for it. Cool! I immediately thought about the old, red Schwinn. I sent the Voyageur to A-Lo, and he dropped off the Xtracycle kit. (Read about A-Lo's Voyageur here)

While A-Lo went the whole hog route, and restored the Voyageur to glory, I went the "re-cycled" route. I used as much stuff as I had laying around as I could. Let me tell ya! It wasn't easy, as I divested myself of most 26" stuff a long time ago. Fortunately, there was enough stuff to get the job done with minimal cash out lay.

I found an old rear wheel, which was necessary because the Schwinn was a 130OLD standard frame, and the Xtracycle uses the now standard 135OLD spread. The wheel is definitely worthy: Suntour Grease Guard hub laced to a Ritchey Vantage Comp rim with double butted Wheelsmith spokes. Yepper! One of the last bits o kit from my '92 Klein Attitude I once had. I also dug up a linear pull brake, and got a Problem Solvers "Travel Agent" to make that work with the old style motorcycle-like levers. I bought a new Bontrager commuter tire for the rear from their Eco range, and found an old cast off WTB "Epic Wolf" tire from Jeff Kerkove's old stash he left behind for the front wheel. A little bit of cables and housing, and I was rolling.

Now I look for reasons to use this rig. My son loves to joyride on the snap deck, so we go out for liesurely cruises, or run errands for "Mrs Guitar Ted" when we can. I gave some neighborhood kids rides on it once, and last night, I ran up to the convenience store a mile away in the dark with my lights blazing just to get my Lady a Diet Coke.

It was an amazing evening outside, by the way.

Remember when I wrote that I would pass this bike on to someone who would cherish it someday? Well, I did.

Congrats! I've been an Xtracycle user since 2004. It's amazing what you can carry on one. The best thing is when you're grocery shopping, you don't have to worry if everything will fit like you do with panniers.

Thanks for the other guidance this week - can't wait to put her together once parts are accumulated!

@Bill: Not unless you had a horizontal drop out donor frame. Then I guess you could "slide" the Xtracycle frame backwards a hair to tension the frame, which the horizontal drops would allow for, but it wouldn't be easy.

Or you could Singulate it.

I was thinking an internally geared hub would be rad for this.