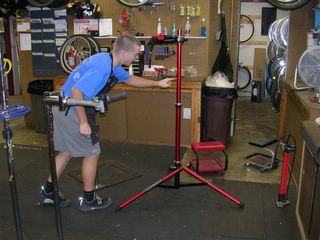 It was weird! All of a sudden, it was there! We didn't know what it was, but we knew it wasn't of this world! The technology was awesome. It had this strange "vibe", we really couldn't quite put our fingers on it........well, that is until Jeff decided to do something crazy! He wanted to touch it. He said he was strangley drawn to it! I told him not to do it, but he did it anyway!!!! Now his weiner will probably fall off, or something worse! Well, I told him! Not my fault!!!

Anyway, next thing we know...poof!...it's gone! Weird! I can't explain it, and you all probably think we're crazy, but it's true!

The only thing we were crazy from was the heat! Must have had half a dozen fans whirring along in there all afternoon! It helped, but the A/C we have would have been nice! But hey! What do I know?

Look for an upcoming review of the consequences of touching alien technology soon!
Posted by Guitar Ted at 4:31 PM