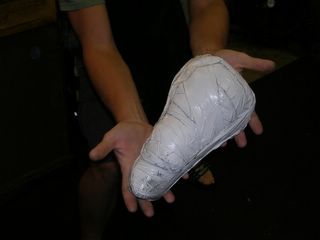 A new discovery has overturned many experts previously held beliefs concerning the earliest developement of two wheeled transportation. Recently un-earthed in a remote Egyptian crypt, a mummified "saddle" resembling modern bicycle saddles has taken the scientific community by storm with its detailed construction. Using modern X-ray and ultra sound equipment, scientist at the Europa Institute of Bicycle Technology have determined that inside the many wrappings surrounding the object is a well preserved saddle. "This can only be seen as a direct link to the modern day bicycle", Doctor G.T. Head said. Indeed, the graphs and technical data seem to point to another accomplishment by the highly evolved ancient Egyptian society. When asked why a bicycle saddle might be mummified, Doctor Head stated, "It's really not that surprising. Egyptians held that they would be in need of food and other material essentials in the after-life. This saddle was probably intended for the deceased use as a means of traveling in the after-life. Perhaps it was the individuals favorite saddle, as cyclist are rather picky about such equipment."

Perhaps, but for now, the mere thought of bicycles in ancient times has been an earth shattering discovery for some experts. Officials at the British Department of Antiquities have issued a statement saying that modern society has to totally re-evaluate the history of the world based on this new discovery. Strong words, but such power is often wielded by such simple things as bicycles. Perhaps it's time you rocked your little world on one!
Posted by Guitar Ted at 4:51 PM

Those are some mighty fine look'n hands. That person should be a professional hand model.