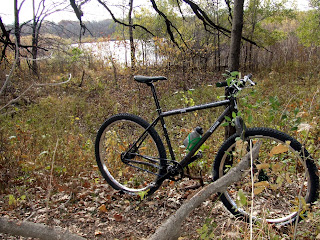 As you may recall, in "Part II" of the Belt Drive Odyssey I had a weird noise occur that I found disconcerting. Well, afterward I discovered that my freehub is kind of noisey, and that pehaps the noise was from this part of the bike. Not 100% on that, but since it is my belief that the noise is due to higher tensions required to run "The Belt" , the score remains as is.

I resolved to run the XXIX at some real trail venues, "torpedoes be damned". I headed off to Cedar Bend, where there are some steady climbs, and some nice, open trails. (A good thing since we've had crazy winds of late) Not a half mile into the ride I hit a steep, stood to mash, and "Thbbbbbbbttttt!" The familiar sound of the ratchet. "The Belt" skipped. I stopped and examined my belt tension, which had no reason to be loose, and regardless of the eccentric being perfectly tight, and regardless of the fact that it had not slipped, "The Belt" seemed to be inexplicably looser.

No big deal. I had a split shell eccentric bottom bracket and a multi tool. Lickety split-like, I had some big time tension on that sucka! No way was it going to ratchet on me now, and it didn't, no matter how hard I hit the pedals. Okay. That's good.

The rest of the ride went fairly normal. I was struck by the odd feeling in my pedals though. I couldn't quite put my finger on it, but something was missing. I am a musician, and tactile feel of things is something I am tuned in to, being a guitar player and all. So, the missing sensations at the pedal were obvious to me. I surmise that it is a function of "The Belt" having carbon fiber strands in it which may be deadening the feedback I would normally be getting from "The Chain". A good or bad thing? I can not say, but it is there for me. I can feel that something is definitely different.

Finally, in regards to that tensioning of "The Belt"? Yeah.......it definitely is putting a "drag" on the crank and free hub. That can't be a good thing.

For a decent showing on the trail, "The Belt" finally scores a point. But due to the excessive tension needed to make it work, we have to give another nod towards "The Chain".

Next week I'll go over some finer points on each contestant and we'll give a final score......
Posted by Guitar Ted at 1:00 AM

The only good thing I see for belt drive is on a commuter you wouldn't get that nasty black line on your dress slacks (or you can use a nylon strap) and it kind of looks cool.